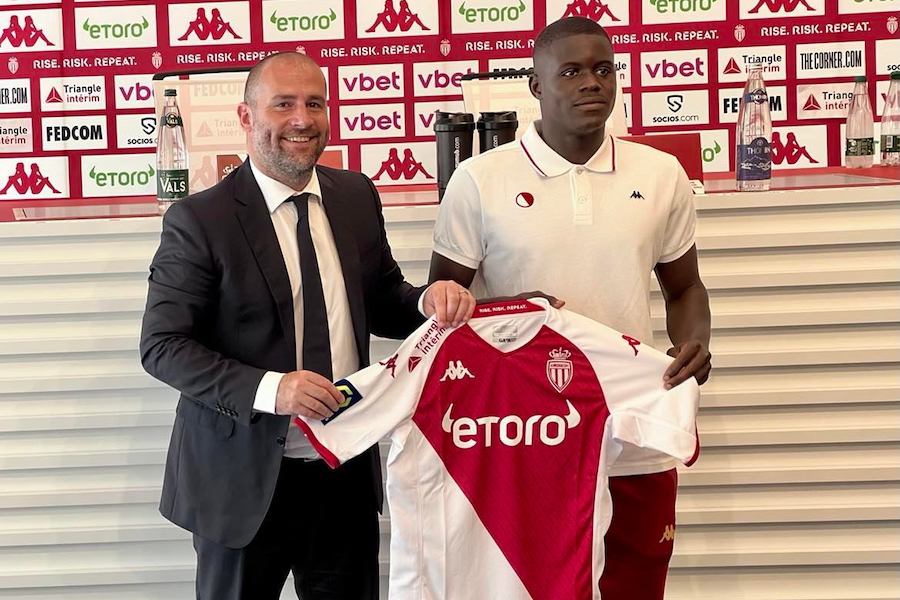 AS Monaco completed the loan signing of Chelsea centre-back Malang Sarr on Wednesday. During his presentation, the former OGC Nice player says that he is returning to Ligue 1 “completely different”.

Having left Nice to join Chelsea on a free transfer back in 2020, he now returns to the French Riviera to join fierce rivals Monaco. He initially joins on a one-year loan with an option to buy that could become an obligation to buy, as sporting director Paul Mitchell revealed to Monaco Life. However, it is unclear what triggers that clause.

Although French youth international Sarr is already a familiar face to many French football fans, he insists that the player they will see take to the field at the Stade Louis II is unrecognisable to the one that left.

“I discovered what was a very high level at Chelsea. I first did a pre-season with the team, before being loaned to FC Porto, which made me grow and taught me a lot. I think that the experiences that I have had outside of France in the past years have brought me a lot. I’m coming back completely different,” said Sarr.

He added, “On a footballing level, I think I’ve progressed in all aspects of my game. On a human level, moving out of my ‘comfort zone’ was a great experience for me. It allowed me to discover another culture abroad, another language, and I think all of that allows me to come back here and be a lot more mature and a lot more certain of a lot of things in life, but also on the pitch.”

He then elaborated on his time at Chelsea, telling Monaco Life, “It’s quite easy to progress there, to be honest when you have the right mentality and you have the chance to learn alongside players like Antonio (Rüdiger) and Thiago (Silva). I took all of their advice because they know perfectly the requirements of the very high level.”

At Chelsea, Sarr was competing for a space in the starting line-up against arguably the best left-sided centre-back in the world, Rüdiger. He is therefore no stranger to having to compete for his place in the side. Should Monaco line-up in a back three, he will find himself likely competing with Benoît Badiashile, whilst if Philippe Clement opts for a back four, Sarr will also come into competition with Axel Disasi and Guillermo Maripán. Given their performances in recent weeks and months, Sarr will also face a great challenge in nailing down a starting spot at the Principality club.

“I’m happy to be here because I’m used to competition. We need competition because the club is ambitious. I think that everyone sees that these are ambitious players as well. We’re going to help each other and that can only be a positive for the club,” Sarr told Monaco Life.

Mitchell concurred with his latest recruit, adding, “I think the main thing he brings is real competition. We said we wanted to strengthen the whole squad this year and if you look, in more or less every position, we have real competition. He brings quality, he brings strength, he brings in agility, and he brings a maturity that I don’t think he had when he was last in France.”

He continued, “I think French football fans will see a totally different player to the one that left. He also gives options. I know at times in pre-season we utilised a back three; Malang is used to playing in that system as well, but he is strong in a two as well. He brings real competition, high quality and maturity above his young years.”

Clement also expressed his delight at the club’s latest recruit. For the Belgian coach, Sarr brings competition, but he also brings options. “We need a selection with enough possibilities,” he began. “So, we needed an extra player in this part of the pitch and we looked at lots of players and Malang was one of my priorities in this list because he has a lot of qualities that can help this team. He has strength and the pace to play high as well and play with lots of space behind him. Being left footed as well, that gives variation. Maripán has done well on the left the last couple of weeks, but it isn’t natural for him. With the four players we have a good opportunity to rotate well so that at any given time, the two centre-backs can play at 100%,” he continued.

Although Sarr is most accustomed to playing as a central defender, he has also in the past been utilised as a left-back and, stressing his commitment to the collective, he said that he would “happily” fill in on that left flank if need be.

But what is certain is that he isn’t being brought in to play at left-back and, as Mitchell stated, nor is he being brought in to replace Badiashile who is reportedly being coveted by some of Europe’s elite. “That definitely isn’t our idea (that Sarr replaces Badiashile). That’s not the reason that we bought Malang. The reasoning is very transparent for me. We want a competitive squad and real competition running throughout the team,” said Mitchell.

He continued, “We spoke before coming here today about playing to win every competition. Malang knows, coming from Chelsea, that has to be the mentality, not only at Chelsea, but also at Monaco. We want players with that mentality. The reason he is here is to compete and compete with the players we have, who are performing well.”

Having featured in Chelsea’s pre-season friendlies, notably in fixtures against Arsenal and Charlotte, Sarr won’t need long to get up to speed. That was confirmed by Clement, who revealed that his physical tests upon joining were “really good”.

Sarr is already looking forward to pulling on the famous Monégasuqe diagonale, and particularly for the derby against his former side, Nice. The local rivals face each other in early September. Asked about how it will feel to return to the stadium where he grew up and developed, he told Monaco Life, “I’ll feel good because it’s a derby, it’s a big match to play in. To be honest, the club and the supporters know that I always gave everything for the club. For me it will be a special match for sure. I’ll take it like any other match. I don’t know what awaits me there, but I have the intention to go there and to – as always – give my best performance and help my team win the match.”

Having “felt the ambition” of the club during the discussions that ultimately brought him to the club, he will be hoping to allow the club to achieve those ambitions this season, and secure Champions League football for next season. In a symbiotic relationship, the club can also help Sarr achieve his personal objective of gaining more game time, and should this fixed-term relationship prove successful

Having “felt the ambition” of the club during talks with the management, Sarr now hopes to play a considerable role in helping Monaco achieve those ambitions, whilst also fulfilling his own ambition of obtaining regular game time. Whilst, for now, Sarr and Monaco are only temporarily wedded, should the ambitions of both the club and the player be mutually fulfilled, there is no reason why he can’t become more of an integral, long-term element of this Monégasque project.

Photo above: Paul Mitchel and Malang Sarr by Monaco Life