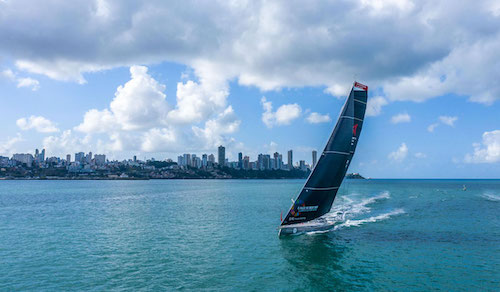 Malizia II, helmed by Boris Herrmann and Will Harris, has crossed the finish in 12th place for the 14th edition of Transat Jacques Vabre.

Salvador de Bahia, Brazil, at an average speed of 12.13 knots. In reality, they covered 4,979 at 13.89 knots and were 1 day 10 hours 20 minutes 43 seconds behind the winner in this class, Apivia, co-skippered by Yann Eliès and Charlie Dalin.

“I’d like to sincerely thank Pierre Casiraghi for his support from the start of this project, the Yacht Club of Monaco and the young people in the Sports Section who followed and encouraged us throughout the race, all the team who helped prepare the boat and my teammate Will who was competing in his first Transat Jacques Vabre.”

The German sailor chose the 25-year-old Englishman Will Harris who had excelled on the Figaro circuit. After joining forces for the Rolex Fastnet Race this summer, the pair decided to tackle this highly-competitive transatlantic which had 29 IMOCAs registered. After a good start and fast race out of the Channel they were lying second off Perros-Guirec.

Rapidly out-paced by the new foilers, they made the choice with the Prysmian Group to continue west, on a less tight option than Hugo Boss, being positioned further south. Boris and Will re-joined Yannick Bestaven and Roland Jourdain (Maître CoQ) and Louis Burton and Davy Beaudart (Bureau Vallée 2).

As they headed south with the other west-option mavericks, they were neck and neck with Hugo Boss until Alex Thomson was forced to stop after hitting a submerged unidentified object north-west of the Canaries.

In the wake of Maître CoQ, Malizia II-Yacht Club de Monaco were locked in a battle with Corum and Groupe Apicil which lasted all along the Brazilian coast. It was a fiercely fought 12th place that has proved an ideal dress rehearsal before Boris Herrmann lines up on 8th November for the start of the 2020 Vendée Globe.

“Obviously, I’m a bit disappointed as the result does not really reflect our ambition or potential,” said Boris Herrmann on his arrival in Brazil. “Nevertheless, we have no regrets. With the information we received at the time of making that strategic decision, going west seemed the right one.”

“We absolutely must have a debriefing with our meteorologists and make an analysis to continue to improve, although undeniably there is always a lot of luck involved. Analysing, taking and accepting risks is all part of the game.”