Manuel de Vasconcelos: “I would not have changed this life for anything”

Manuel de Vasconcelos: “I would not have changed this life for anything” 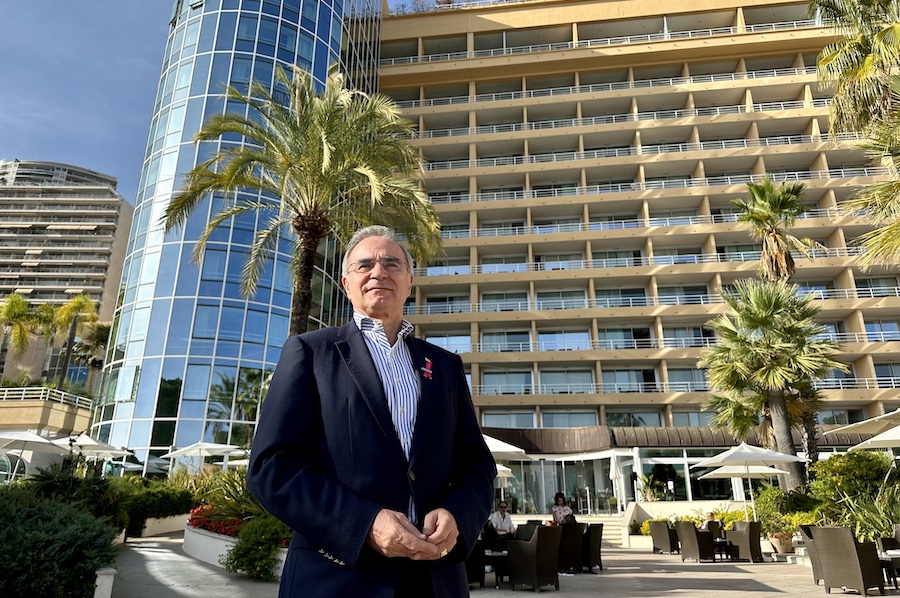 For just over a decade, Manuel de Vasconcelos has headed Le Meridien Beach Plaza in Monaco, overseeing some of its most important changes and marking its 50th anniversary with staff, clients and Prince Albert this September.

Now, he is preparing to hand over his general manager badge because “the perfect time to retire is before you have to”.

Monaco Life caught up with the Portuguese native to talk about how Le Meridien has changed over the years, and what is in store for both their futures.

Monaco Life: The Larvotto district has seen an enormous amount of development over the years. How different is this area now compared to when you started at Le Meridien in 2012?

Manuel de Vasconcelos: The change is incredible. It was empty here, there was nothing. The Larvotto beach now looks fantastic, the new promenade, it’s all so much nicer. Before, we had absolutely no choice of restaurants, there really was nothing. Now there are plenty of things opening, and the new Monte-Carlo Bay Hotel & Resort Beach is lovely too.

What brought you to Monaco?

One day, my boss asked me if I wanted to come to Monaco and I said “Would I!?”. I had had enough of the renovation works and a year and a half of hotel closure, so I told him that it was a great idea. Paris is a fantastic city, you can never get tired of Paris, but I was missing the sea and the sun. Monaco also has the auto-racing, and I love cars, so that’s how I came here.

In September, Le Meridien celebrated its 50th birthday, and you threw a wonderful party by the swimming pools attended by HSH Prince Albert…

Yes, it was a lovely party. Prince Albert was actually here when they opened the hotel in 1972, he was 14-years-old then, so he has very fond memories of this hotel.

How much change have you seen in this hotel during your time here?

Over the past 11 years, I have overseen the renovation of pretty much everything, from the lobby to the restaurant, every room, the restaurant terraces, we have done everything.

The walls of Le Meridien are owned by the State of Monaco, while the Société des Bains de Mer (SBM) is the tenant, and the brand is the property of Marriott International. What does the future look like for this hotel?

We have a contract with SBM until September 2023, which we are expecting to be renewed as it has been two times already, and we are waiting for the announcement any moment of an extension, which everyone has told me verbally would happen in around two to three years. So that is part of the hotel’s future.

Can you give us more detail about the extension? Will the hotel be renovated or demolished and rebuilt?

I know the contract with SBM will be extended, but I don’t know what will happen next. I think there will be a big renovation of the hotel, and I believe it deserves it. It is the only hotel in Monaco to have a private beach. It has such a unique location – the panorama, the scenery. I think it is one of the best places in town, so it deserves the attention.

I only know that the building will remain a hotel and that the government wants to keep it at four stars.

What are some of the highlights of your years here as GM?

There have been so many. The life of a hotelier is never monotonous, things change every day. There are always funny stories and memories made. I remember working with the architect for all the renovation works that we have done, all the floors, the restaurant and the bar. The creation of the lobby where we do art exhibitions now has changed the feeling of this area immensely. Entering a hotel lobby can often feel very cold, but I think we managed to create a warm ambiance, and the fact that we regularly change the exhibitions helps to create an involvement with the city, it gives people something to talk about, but essentially it feels warmer. I was looking for something to put in the centre of the lobby since I arrived, and the sculpture of the big fist is just perfect.

I remember creating the revolving doors because every time you opened the door, the heat or the cold would come in.

We changed all the windows in the rooms because we were having complaints about street noise. So, it is something you don’t see but it was one of the most important things we changed at the beginning. Then we changed the elevators because they were stopping on every second floor.

We started Sunset on the Beach during the Monaco Grand Prix, from 11am to midnight, which became a huge event that was taken to other places in the world. We had the Amber Lounge here for many years.

And the various partnerships we have had for the summer restaurant, which is now L’Intempo by Sergi Arola, a great Spanish chef who embraces the concept of sharing.

It must be fun working in a hotel… There is always something changing, evolving, meeting new people…

It’s wonderful, I would not change this life for anything. When I was a kid, I thought I wanted to be an ambassador, to work in diplomacy, because I always had this feeling of travelling and meeting people. Things didn’t work out because of the Portuguese revolution and universities went on strike at the time, so in the end I entered into hotels and it’s been fantastic.

What do you think has been the key to the success of Le Meridien?

The biggest thing we have is the people. People are the most important thing in this business. I spend most of my time with people, be it guests or staff. This hotel has had some staff stay for decades. Our room service waiter retired only after 42 years on the job. The head concierge Raymond Viano was here since the opening in 1972, we celebrated his 70th birthday in the lobby. Others have worked here for 30, 35 years, and these are the people that give this place soul. My job in this chair is to guide the hotel through the new trends that guests expect, but to make sure it keeps its soul, and I think we have managed to do that quite well. And we will continue to keep that homely feeling here at Le Meridien.

What’s next for you?

Well, I will be doing a soft handover in the new year to the new general manager. Then, for me personally I have plenty of things I want to do. I am very happy with my job, but it is important to do other things in life. That’s why I am retiring before I have to, it is the best time to do it. Now is the time to enjoy other things in life.

As a hotel manager, you don’t have time for a lot of things, so I want read a lot more, play golf, travel – there are so many things I want to do. I know that some people who retire feel depressed because they are missing the adrenaline or something from the job, but I don’t think I will have that problem. I have so many things that I want to do, I just want there to be enough time to do it all!