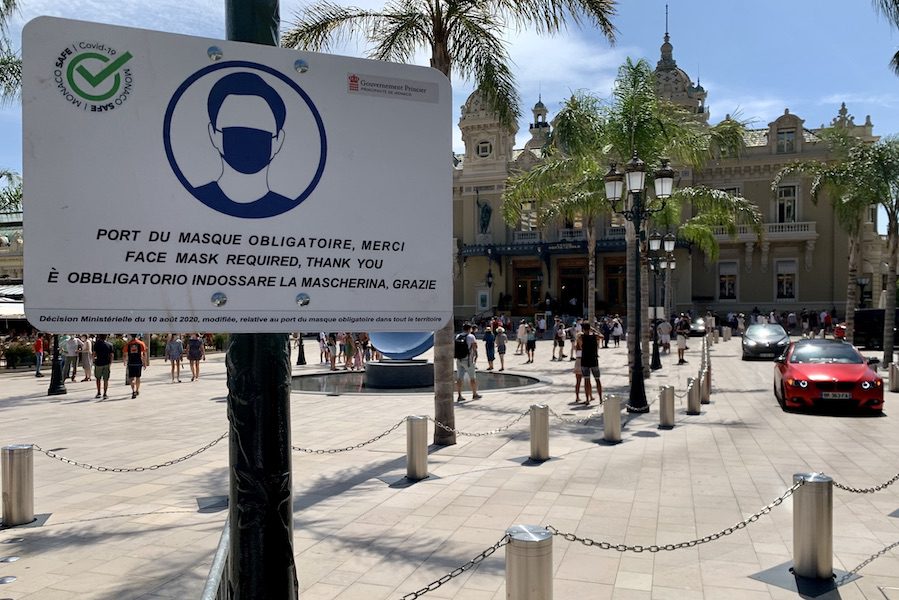 As Monaco gears up for Christmas celebrations, the government has announced that it will reinstate a number of restrictions due to an unprecedented rise in Covid circulation throughout the Principality.
Minister of State Pierre Dartout made the announcement in a press conference on Friday, saying the reinforcement of measures was designed to prevent the need for another lockdown.
Dartout said that from Saturday 27th November, masks will once again be mandatory outdoors, at all times, everywhere in Monaco.
Come Monday 29th, the validity of PCR tests will be reduced from 72 to 24 hours, a move that France initiated on Thursday as a way of encouraging more people to get vaccinated.
Working from home is also again “highly recommended” in the private and public sectors.
Brakes pulled on parties
Just as Monaco is gearing up for Christmas celebrations, the government also announced that standing cocktails and drinks is suspended in establishments from Monday; so too is dancing and karaoke.
Slowing the spread in schools
Restrictions have been reintroduced in schools, namely the wearing of masks for indoor sports, except for competitions, and the suspension of school swimming lessons. Combat and contact sports are also not allowed.
Health pass rule extended
Also from Monday 29th, the measures initially planned for 1st December will come into force, including the need for a health pass to consume inside and on the terrace of restaurants and bars. This also applies to young people aged 16 to 18.
The health pass will be required to access performance halls and meeting spaces when there are more than 300 people. This concerns, in particular, the Opera, the Princess Grace Theater and the Grimaldi Forum.
“In view of the epidemic rebound, the Government plans for 15th December to extend the obligation of the health pass to all people who work in places where the pass is required for the public who access it. This concerns restaurants, bars, nightclubs, as well as the Stade Louis II, the Grimaldi Forum and the Opera in particular,” said the government in a statement.
Spiraling health situation
The reinstatement of restrictions is due to a tripling of the incidence rate in three weeks, which is now as high as 346, and a positivity rate that has gone from 1.5 to 3.5%.
The new measures will last until at least 20th December.