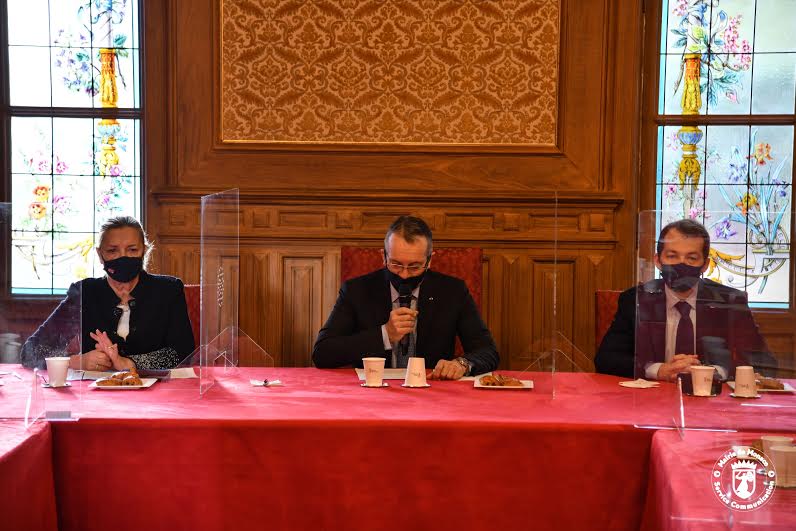 In his traditional new year meeting with the press, Monaco’s Mayor Georges Marsan has revealed that the new digital Monegasque Identity Card will be rolled out in the next few months.
Mayor Georges Marsan, along with First Assistant and Mediathèque Delegate, Camille Svara and Nicolas Croesi, Assistant in Charge of the Digital Transition, held a press conference on Friday 15th January to discuss three major projects happening this year in the Principality, as well as to give an update on the progress of digital transition plans.
The first project involves the Rainier III Academy, which was forced to close in September due to technical problems in the building. Classes have continued in makeshift classrooms all over Monaco and have allowed the musical education they provide to continue.
The Town Hall Secretary General and a new management team under the leadership of Jade Sapolin have been making the necessary repairs. The project is enormous, with all the walls in the building being taken down to refit the structure and create new classrooms. Works are on target for a reopening for the start of the 2021-2022 school year in September.
The second project is the Jardin Exotique. This is an ongoing scheme that had been started during the first confinement period when perilously hanging rocks were secured. Upon further inspection of the site, more structural issues cropped up that needed attention and so these works will continue until the end of 2021. The gardens will be closed during this period.
The third major project concerns the Villa Lamartine. The plan is to renovate the building to become an “Intergenerational living house”. The work has obtained the BD2M eco-responsible renovation label and will be done to the strictest standards.
The José Notari Sonothèque and the Videothèque will temporarily be housed at the Louis Notari library on Rue Princess Antoinette.
The mayor then moved onto the digital transition announcing, “In the next few months, the new Monegasque Identity Card will be rolled out, which will allow each Monegasque, if they wish, to have a secure digital identity which in the short term will greatly facilitate administrative procedures.”

Additionally, large screens are continuing to be installed all over the Principality. There are two large format versions, one at Stade Louis II and another at the Canton Roundabout, and seven more 75-inch panels that have been installed between 2018 and 2020 around town. This year, the goal is to add three more screens at Monaco’s entry points and another at Larvotto once the area’s rehabilitation is completed.
Culture is also getting a boost from digitalisation. The School of Fine Arts will organise its virtual open days from Saturday 13th February. The Academy is also adapting and will record a Jazz and Current Music concert on 28th and 29th January that will be broadcast on YouTube and other social media outlets.
The Media Library also remains very active by organising conferences and film clubs with a limited number of participants, by reservation and at times arranged to comply with the curfew in force.
Hopes are high that by summer, live events and exhibitions will once again be allowed, but as of right now, the Town Hall is reluctant to make or reveal concrete plans.
The mayor signed off on a cheerful note saying, “The year will be rich in projects despite the continuing health crisis which requires a lot of adaptation. We remain optimistic and motivated and our Town Hall is always active, it is modernised every day and continues to listen to everyone’s needs and wishes.”