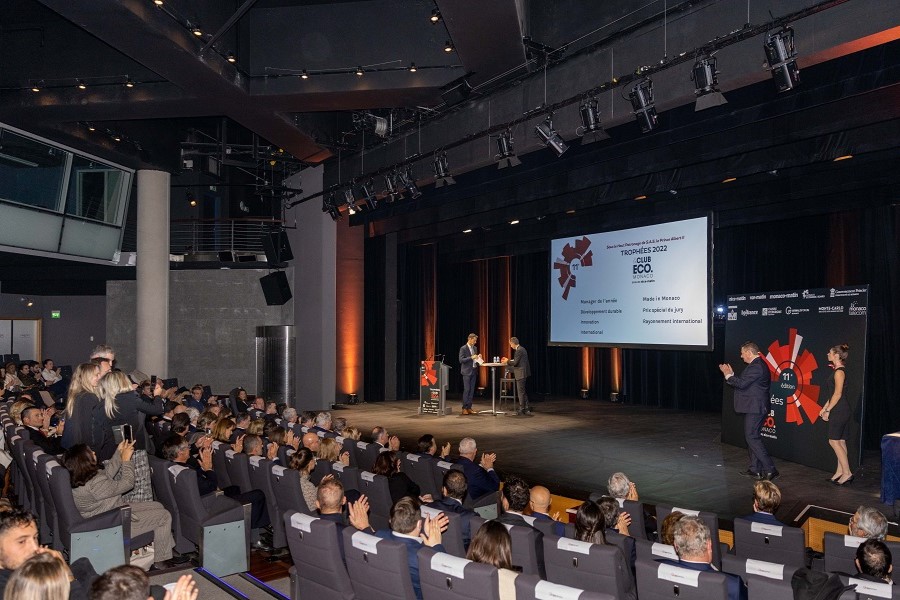 At a ceremony last week, the collaborative Club Eco Monaco awards of the Monaco Economic Board and Nice-Matin group handed out seven gongs to the 2022 laureates.

The 11th edition of the Club Eco Monaco Awards took place at the Grimaldi Forum’s Salle Camille Blanc on 29th November in the presence of numerous Monegasque dignitaries and decision makers from Minister of State Pierre Dartout and Minister for Economy and Finance Jean Castellini to President of the National Council Brigitte Boccone-Pagès.

It was a moment in the spotlight for each of the seven 2022 winners, who were individually welcomed to the stage by CEO of the Monaco Economic Board (MEB) Guillaume Rose. After receiving their award, the dynamic collection of entrepreneurs and professionals were interviewed live by the editor-in-chief of the Nice-Matin group, Christian Huault.

The Sustainable Development Trophy went to Sylvia Ratkowski and Pierre Magnes of FGWRS, a start-up that began thanks to the support of MonacoTech and has created a grey water recycling system recently adopted by the European Space Agency.

The International Trophy rewarded the Forté Pharma laboratory, a specialist in food supplements that has grown exponentially over the last few years following massive development outside of Monaco. The award was given to its dedicated export director, Cédric Rinaudo.

The Made in Monaco gong went to Les Perles de Monte-Carlo and its founders Brice Cachia and Frédéric Rouxeville, who have worked tirelessly to create the first ever oyster nursery in the Mediterranean. Their home-produced seafood can be found on menus across the Principality’s spread of high-end restaurants.

The Special Jury Prize was awarded to the International University of Monaco and its Managing Director Jean-Philippe Muller who, for the past decade, has developed the campus into a world class destination for international students and teaching staff.

The International Standing Trophy was awarded to the Scientific Center of Monaco, a vibrant organisation at the forefront of countless inspirational projects.

The Manager of the Year Trophy went to Jean-Victor Pastor who, among his other business activities, has established the Maya Collection of restaurants both in Monaco and further afield.

The final award of the night, the Innovation Trophy, was awarded to the three founders of Carlo:  Antoine and Armand Bahri and Marta Mas Portas. This well-known mobile app gives customers in partner shops and boutiques cashback on their purchases. It has been widely adopted across the Principality.

Monaco: a place for businesses to flourish and succeed

Launched in 2012, over 70 innovative companies and individuals who have “found in Monaco, the conditions to flourish and succeed” – the words of MEB President Michel Dotta – have now won one of these prestigious awards.

“The [2022] winners illustrate the richness and diversity of the Monegasque ecosystem,” said the MEB in a statement following the event, while the managing director of the Nice-Matin group, Jean-Louis Pelé, said the awards “highlighted the dynamism, creativity and spirit of innovation” in Monaco.