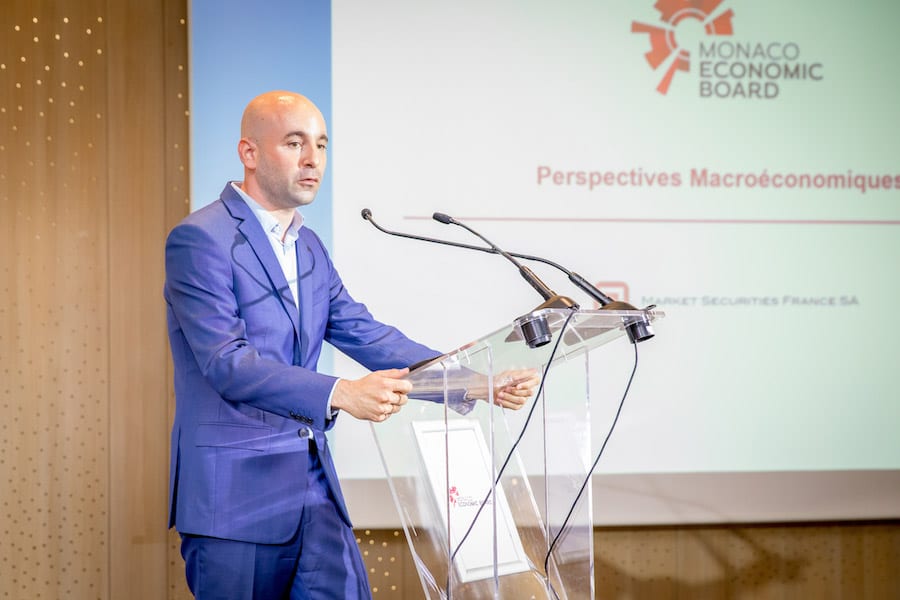 One of the world’s top forecasters, Christophe Barraud, has told an audience of Monaco entrepreneurs what he predicts the global economic recovery will look like in 2021.
Voted Forecaster of the Year 2020, Top Forecaster of the Eurozone Economy 2015-2019, Top Forecaster of the US Economy 2012-2020, and Top Forecaster of the Chinese Economy 2017-2020, Christophe Barraud’s presence in Monaco was always destined to be a coup for local businesses and its organiser, the Monaco Economic Board (MEB).
This week’s presentation was the first big “phygital” event of the year for the MEB and Christophe Barraud delivered his macroeconomic scenario for the coming months to a room of 70 local economic players and in front of cameras that broadcast the presentation, translated into English, to nearly 150 participants worldwide. His main forecast: an extremely marked recovery of global activity with growth of more than 6% for the year 2021.
This optimism, which he says can vary depending on the regions of the world, can be explained by four major factors. Firstly, the effectiveness and acceleration of the distribution of vaccines against Covid-19 have created a shock of confidence, and the latest wave of the epidemic appears to be under control in the vast majority of developed economies.
Secondly, the arrival of Joe Biden as President of the United States of America has eased trade tensions, especially with Europe, as highlighted by the truce in the Airbus-Boeing dispute. Above all, he says, the new administration has given better visibility to economic players, now freed from the threat of unpredictable tweets. As a result, Christophe Barraud says he foresees an increase of around 10% in world merchandise trade volume in 2021.
Thirdly, the excess in savings that many households have experienced as a result of the pandemic should contribute to the recovery through increased consumption.
Finally, the economist underlined the ultra-accommodating monetary policy in developed countries and the combined balance sheet of the G7 central banks, which has increased by more than 10 trillion dollars in the space of 15 months between February 2020 and May 2021.
The situation is not without risks, however. Among other threats, the forecaster points to the presence of variants that are likely to change the health situation, and the risk of social unrest, as history has shown that the end of a pandemic has always been accompanied by an increase in inequalities.
Christophe Barraud finished the evening with a question-and-answer session before joining the Monegasque entrepreneurs for a friendly Covid-compatible cocktail, ending a conference that successfully marked the return of face-to-face actions of the MEB.
Coming up on the MEB agenda is the general assembly coupled with the emblematic membership meeting.

Photo of Christophe Barraud by the MEB