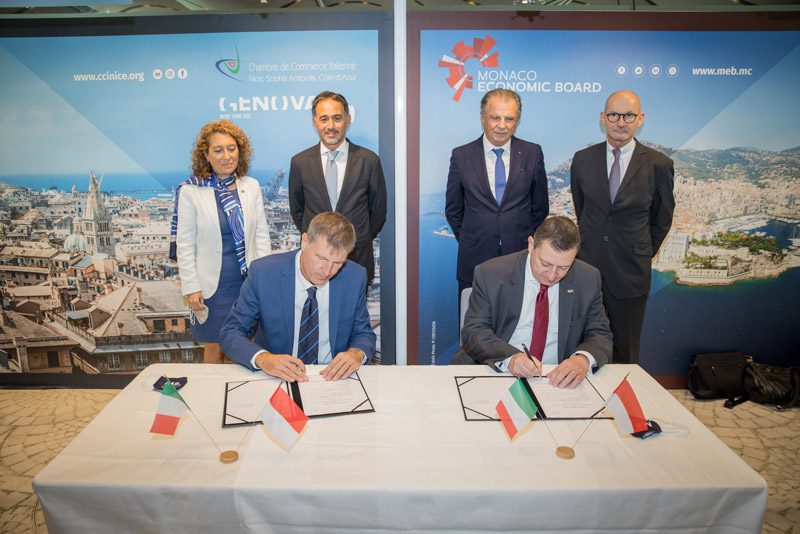 The Monaco Economic Board (MEB) has signed a cooperation agreement with the Italian Nice, Sophia-Antipolis, Côte d’Azur Chamber of Commerce at the Monaco Business fair, further strengthening their relationship.

MEB Executive Director General Guillaume Rose and Agostino Pesce, Director General of the Italian Nice, Sophia-Antipolis, Côte d’Azur Chamber of Commerce, formalised the coming together of the two at the Monaco Business fair on 6th Octoberat a ceremony attended by many key figures. Founded in 1997 and recognised by the Italian government and France, this Italian Chamber of Commerce offers a gateway to doing business in Italy by acting as a facilitator.

The two shared a stand to promote the agreement’s potential to local businesses. Key players in both countries’ economies complement each other which, along with close integration of Monaco’s economy in the region, plays a major role in its growth. Last year at the same event, MEB signed a similar agreement with Nice Côte d’Azur Chamber of Commerce andIndustry.

MEB and the Italian Chamber of Commerce were also partners at a conference on the theme ‘Italo-Monegasque business relations and opportunities’.

The agreement is another string to MEB’s bow in its relations with Italy, which also includes Monaco’s well established diplomatic and consular network and the Destination Monaco Ambassadors Club comprising captains of industry with strong links to the Principality, as well as Italian entrepreneurs and their representatives who are settled in the city-state.

In December, the MEB is organising a major business forum in Monaco in partnership with the Destination Monaco Ambassadors Club, providing member companies with more opportunities to grow their business with its big neighbour.

Business & Finance Cassandra Tanti - November 21, 2019
A fresh batch of key macro data out next week from the main developed economies look set to be mixed as markets are bouyed by fresh optimism over declining trade tensions. The second estimate of US gross domestic product (GDP) is expected to confirm that the economy expanded by 1.9% in the three months to September. The deceleration in US growth is evident compared to 2018 levels, but data out of the country continue to be expansionary and supportive of steady GDP growth. Protectionism-driven weakness in the corporate sector is still more than offset by strong consumer spending. October’s consumption, out next week, is expected to confirm this trend and will likely be lifted by increasing optimism around a “phase one” trade deal between the US and China. In the eurozone, inflation remains subdued after further edging down in October on the back of the region’s anemic growth profile. There are unlikely to be large upside surprises in November’s harmonised index of consumer prices flash print, which should remain well below target and warrant loose monetary policy. However, with European Central Bank measures losing their effectiveness and the central bank running out of ammunition, fiscal spending and structural reform is now expected to play a more important role in stimulating the economy. That said, we believe that a step up in fiscal loosening would only occur in the event of deteriorating macro data. The week ahead looks quieter in the UK, where we expect key prints from the housing market to be mildly encouraging. UK house prices growth has been modest throughout 2019, with London becoming the slowest growing region amid Brexit-led uncertainty. However, we wouldn’t be surprised to see an uptick in the November’s Nationwide house price reading. Low interest rates and heightened hopes for a Brexit resolution are likely to have delivered much needed relief to the UK housing market.

Are markets buying the rumour and selling the fact?

The S&P 500 has broken record highs once again this month. More interestingly, the recent move has occurred simultaneously with volatility falling to noticeably low levels. But is the period of market calm set to last? Improving sentiment stems from optimism around Brexit, after the increasing likelihood that a no-deal departure will be avoided, and reports of “constructive talks” between the US and China. However, there are some caveats worth addressing in respect of this rosy picture. Firstly, as the chart shows, volatility at such low levels may persist over the short to medium term. But at some point it is likely to increase, often triggered by something as small as a presidential tweet. Secondly, we have seen the US and China trade negotiation movie before. A similar rally occurred the last time President Trump and his counterpart President Xi negotiated, earlier this year, only for talks to fall apart at the last minute. The result was a spike in volatility and a market sell-off resulting from escalating trade tensions. For more information contact Barclays Private Bank in Monaco by clicking here or on +377 93 15 35 35