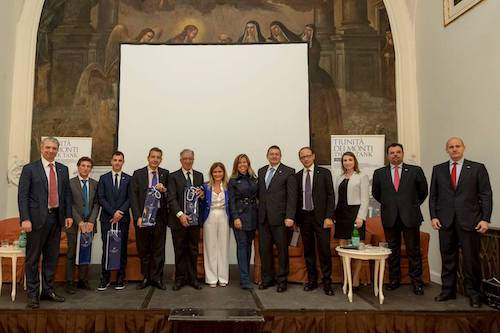 The Chamber of Commerce’s Monaco Economic Board (MEB) met last week with almost 100 institutional and private company directors in the Italian city with the goal of building stronger ties to the Campania region.

Three events were held over two days, from 21st to 23rd October, and were attended by representatives from the MEB as well as delegates from Richelieu Bank, Mazza Immobilier and Engineering and Energy.

Think tank Trinità dei Monti hosted a business meeting for 80 on Monday. Tuesday morning there was an assembly with the Naples Chamber of Commerce, where letters of intent were signed announcing new mutual economic cooperation between the two parties. That evening, an event with members of the Neapolitan Club of Ambassadors, a club of economic and institutional players with links to Monaco, met at the Circolo Nazionale dell’Unione.

As a close neighbour, Italy is an important ally with regard to trade and business development and these meetings have solidified the already good relations between the two regions.

The Monaco Economic Board will return to Italy from 8th to 10th November, meeting with business leaders and officials in Turin.