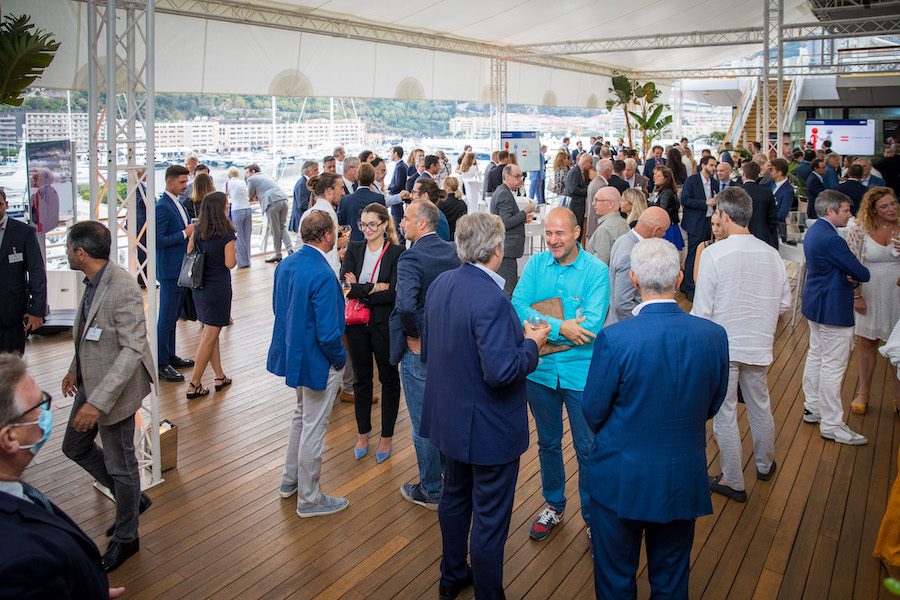 The Monaco Economic Board met on Tuesday for their 39th annual Member’s Meeting at the Yacht Club of Monaco, with over 220 entrepreneurs in attendance.

Now that summer is over, it’s back to business for the members of the Monaco Economic Board (MEB). On Tuesday 14th September, they met for their annual Member’s Meeting where Executive General Director Guillaume Rose presented the organisations upcoming events, highlighted what the MEB offers adherents, and spoke of the variety of collaborations being displayed with regard to the digital and energy transitions taking place in Monaco.

The health pass obligation and the requirement that guests stand rather than be seated did not seem to deter the assembled group who were just pleased to be carrying on a semblance of business as usual.

President Michel Dotta delivered a welcome speech followed by Mr Rose’s plan of action for the upcoming year, which included economic conferences with renowned speakers such as Jean-Pierre Petit, President of the Cahiers Verts de l’Économie on 17th September, Ludovic Subran, Chief Economist of the Allianz Group on 14th October, and a destination conference dedicated business in Singapore with Ruchdi Hajjar of SGMC Capital on 23rd September.

Additionally, the MEB will be hosting a trade show on 6th October in conjunction with the Monaco Yacht Show and Monaco Business where they will formalise a partnership with the Italian Chambre of Commerce Nice, Sophia-Antipolis, Côte d’Azur.

An economic mission to Antwerp is scheduled from 28th to 30th September and several trips are being planned to go to Dubai, particularly during the Expo 2020. They will be hosting a delegation from Austria on 8th and 9th November as well as during the Ambassador’s Gala of Destination Monaco on 4th December.

The MEB will also be present at the 10th Eco Monaco Cub Trophies on 30th November.

Mr Rose ended his talk by speaking of the actions carried out with the Interministerial delegation in charge of the digital transition, such as digital workshops, as well as the MEB’s work with the Digital Transition Mission, including the popular MENinars, incentives for companies to join the National Energy Pact as part of membership registration and encouraging members to promote the Green Fund.

After the presentation, there was cocktail reception where networking opportunities took front and centre.

Photos provided by the MEB

Business & Finance Stephanie Horsman - May 19, 2022
The Club Suisse de Monaco recently invited former German government minister Julia Klöckner to speak on a variety of topics, including the effects of rising inflation in the EU.

HMRC investigates suspected Money Laundering Regulations breaches.Photo: HM Revenue & Customs[/caption] The UK tax authorities have announced a consultation period on plans intended to limit the number and efficiency of complex offshore arrangements that aim to bring tax advantages to UK taxpayers. Businesses such as agents, advisers and accountants would be provided with a “notification number” to pass on to their clients, who would then be expected to use this number when making UK tax returns. Earlier this year a Monaco-based accountant narrowly escaped a jail term in the UK for his involvement in a tax scheme centred on a service that was never provided. A complex structure involved a company in Guernsey, and investors received tax reductions that were bigger than their investments. The consultation period ends on February 27, 2017.