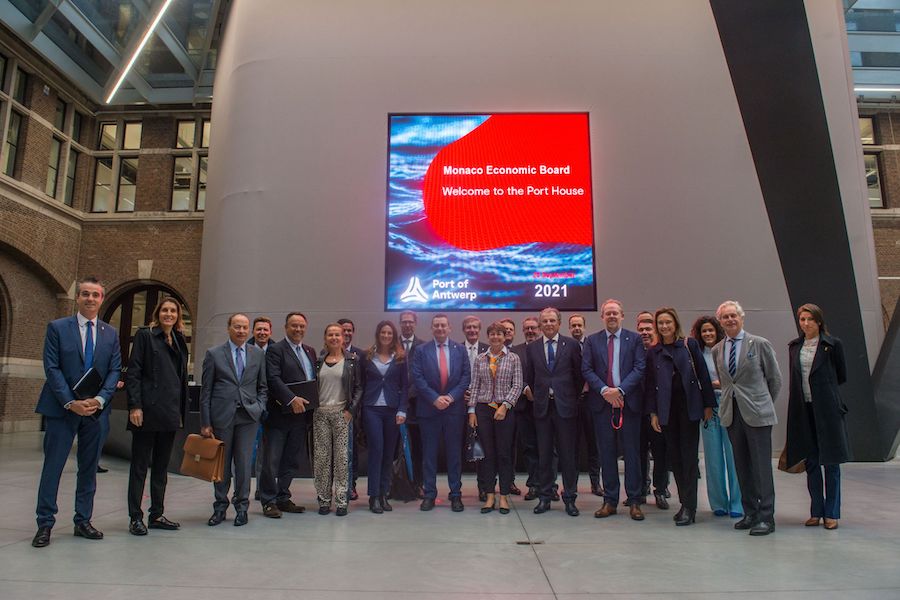 A delegation of a dozen entrepreneurs headed by the Monaco Economic Board (MEB) has taken part in a trade mission to Antwerp, Europe’s second largest port and the world capital of diamonds.
The trade mission in September opened with a dinner in the neogothic setting of the old trade exchange, Handelsbeurs, attended by Monaco Ambassador to Belgium Isabelle Berro-Amadeï  and Belgium’s Consul in Monaco Nancy Dotta-Van Tendeloo, also from Antwerp. During the evening, various speakers including Michel Dotta and Guillaume Rose for the MEB had a chance to highlight the advantages of doing business in the Principality to an audience of stakeholders and high-ranking figures in the Flemish city, most of whom were invited by Guy Van Doosselaere, Monaco’s Honorary Consul in Antwerp. Before the dinner, a cocktail provided the ideal setting for Monegasque companies to make their first contacts.
The main agenda took place the next day at the port of Antwerp, Europe’s second largest, where the delegation was hosted by the port authorities and toured several sites. They included Euroports, a subsidiary of the Monaco Resources Group which has several terminals and symbolises new trade relations between the two countries.
At the business forum organised on site, the MEB signed a cooperation agreement with the CBL-ACP Chamber of Commerce that will strengthen ties with Belgium and other regions in the world, notably Africa. CEMA (Club des Entrepreneurs Monégasques en Afrique) was also on the trip, represented by its President Fréderic Geerts who also signed an agreement. This was followed by targeted meetings between around 60 Monegasque and Flemish entrepreneurs, mainly but not exclusively on trade and logistics. In the evening, a dinner hosted by Mrs Berro-Amadeï was another chance to exchange business cards in a privileged setting.
On the Thursday there was an opportunity to visit the Antwerp World Diamond Centre through which all diamonds processed or sold in Antwerp pass through, that’s around 86% of the world’s rough diamonds and 50% of its polished stones. Initial analysis of the debriefing lunch which concluded the trip was very positive, highlighting the desire of companies in Monaco to conquer new markets.
The MEB is not resting on its laurels with the upcoming Dubai Expo20 when several sector-specific missions are planned. Another trip is also scheduled to St Petersburg in the first half of 2022.