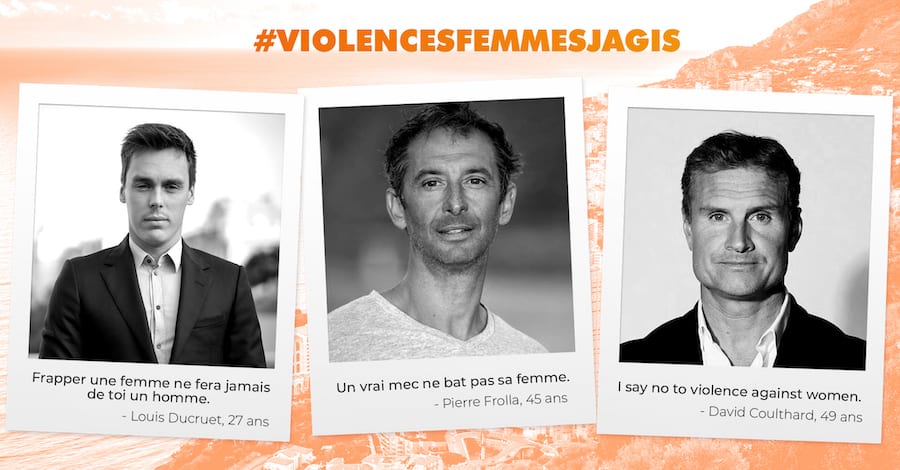 As part of the International Day to End Violence against Women on 25th November, a Monegasque campaign has turned the spotlight onto men – the silent allies of victims of domestic violence.

Princess Stéphanie’s son Louis Ducruet, ex-Formula One racer David Coulthard and Champion Diver Pierre Frolla are among 100 men who have united for the campaign, created by SheCanHeCan and Fight Aids Monaco, and supported by the Committee for the Promotion and Protection of Women’s Rights in Monaco.

The campaign launched on Monday 23rd November and features portraits of 100 men, each with a message he chose to share, such as “Hitting a woman will never make you a man” or “I say no to violence against women”. The images are visible on the websites and social media networks of SheCanHeCan, Fight Aids Monaco and the Committee for the Promotion and Protection of Women’s Rights.

Participants were also invited to take a pledge for equality promising to continue their actions to make equality a reality in their daily lives.

“We must remember that the majority of men do not perpetrate violence against women, they don’t find it ok, and they don’t support it,” said Ms Brask Thomsen to Monaco Life. “We call them the silent majority because we don’t hear from them enough. The aim of this campaign is to shine light on the majority of men who are against violence and whom we seldom hear. Our aim is to portray them as allies.”

According to a statement by Josep Borrell, Vice President of the European Commission, “The scale of the problem remains alarming: one in three women in the European Union have experienced physical and/or sexual violence.”

These numbers are only the tip of the iceberg, as this type of violence remains largely unreported due to the stigma and shame surrounding it. As a result, many perpetrators go unpunished.

And for many, the Covid-19 pandemic and subsequent lockdowns have only made the situation worse.

“Domestic violence is seen as something to be dealt with in the private sphere, that we shouldn’t interfere with,” said Ms Brask Thomsen. “But the entire community has a role to play in challenging a culture which allows such violence to take place. In the end, it’s the small actions which can really make a difference: don’t laugh at that joke, don’t catcall women on the street, don’t sexualise young girls or focus on their appearance instead of their achievements, don’t use vocabulary such as ‘don’t cry like a girl’ or ‘you run like a girl’ in negative terms. Be a positive role model for younger boys, allow them to show their emotions, to teach them it’s ok to cry and be the good guy.”

To mark International Day to End Violence against Women on 25th November, the Prince’s Palace, the Conseil National and the Tour Odeon will all be lit in orange to show support for victims of domestic violence worldwide.

A conference on the theme ‘The justice system confronted to intrafamilial violence’ hosted by Robert Gelli, State Secretary for Justice, will take place on 26th November at 6pm at the Lycée Technique et Hotelier in Monaco.

To register for the conference, email: dfm@gouv.mc.

The Casino de Monte-Carlo was the site for this year’s European Dealer Championships, where the crème de la crème of card dealers competed and Monaco’s young croupiers placed well.

Culture Staff Writer - May 3, 2017
Artmonte-carlo is a new art exhibition with the intention of establishing itself on the French Riviera as a leading artistic platform for contemporary art, modern art and contemporary design, in order to meet the demands of the many collectors and art lovers in the region. For the second edition, which took place from April 29 to 30 at Grimaldi Forum, Sabrina Monte-Carlo, associated with the prestigious B&B Italia furniture brand, tastefully decorated three relaxing areas at the forum: armchairs in the bar area, a lounge seating area within the exhibition and in the press/reading centre. Prince Albert, accompanied by the Princess of Hanover, honoured the salon with his presence at the pre-opening on April 28. “The event, like last year, was a real success and we are delighted to support the idea of the ‘art fair’ as ‘museums pop up art fairs’ of a controlled size, which distinguishes itself from the formats and concepts of the main traditional art fairs. Taking place in a refined and human-sized setting, artmonte-carlo is a reflexion of the place, pleasant and with international influence,” the organisers said.