Minister of State thanks Monaco police, 9 posts to be added

Serge Telle, Minister of State, accompanied by Patrice Cellario, Minister of the Interior, stopped by the headquarters of the Public Security Department on Monday evening.

Their visit was timed to correspond to the handover between the day and night shifts.

The Minister of State congratulated the men working under Richard Marangoni, Director of Public Safety, for their exemplary performance during the recent robbery of the Cartier jewellery store. “Even if it’s all over, thanks to you, we can not pretend that nothing has happened,” he said.

He also referred to the future “Public Safety 2020” plan and indicated that new human resources will reinforce the capacities of the Public Security Service with, first of all, during the course of 2017, the creation of nine more posts for police officers, and the implementation of a civilian reserve.

In conclusion, Minister Telle thanked the police officers for their commitment, their work, their seriousness and their rigour. At the end of his visit, the Minister went on to the police station of the Place du Casino, which was in the frontline during the robbery of March 25.

Three in custody for Cartier robbery, suspect may have used St Paul’s Church

Larvotto accessible to everyone

Local News Staff Writer - July 29, 2017
https://www.youtube.com/watch?v=wpAhTevRkYQ Monaco’s Handiplage-Audioplage, which opened on July 4, has been a great success since its inception 12 years ago. In 2016, the service, which is available for those with disabilities, reduced mobility or who are blind or partially sighted, was used 500 times during the summer, making the beach accessible to everyone thanks to the use of special equipment and the commitment of four team members to help users. The service enables the blind and visually impaired to enjoy the sea in complete freedom and safety thanks to sound beacons indicating their position in the water. There are also Four "Tiralo" floating wheelchairs, and toilets, showers and a concrete ramp from the sea wall and specially adapted parking. You can also benefit from three hours' free parking in the Larvotto car park. Handiplage-Audioplage, which is a partnership between the government and the International Soroptimist Club of Monaco, is open seven days a week and public holidays, from 10 am to 5 pm, until September 3, on Larvotto Beach, on the right side of the central pier. There is no reservation necessary for the Handiplage but access to the Audioplage service requires a booking on 06 78 63 09 41 (only available in the mornings). A free on-demand minibus transport service (Monday to Saturday, 10 am to 8pm during the summer) is available for disabled and elderly people in the Principality with reduced mobility, and this can also be used to get to Larvotto Beach. Those with a travel pass obtained from the Department of Social Welfare and Social Services can call 80 00 20 50 to reserve on Mobi'bus. (Homepage image: V&A Dudush) 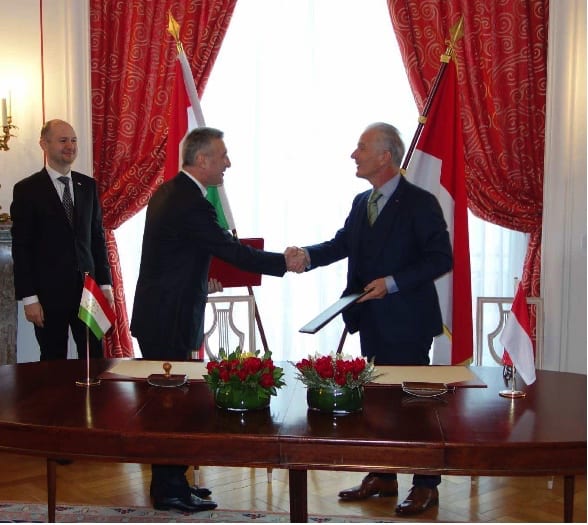  S.E. Mr. Homidjon Narov, Ambassador of Tajikistan to France and HE Mr Claude Cottalorda, Ambassador of Monaco to France. Photo: ©DR[/caption] The Principality and the Republic of Tajikistan have established diplomatic relations. A joint communiqué to that effect was signed by HE Mr Claude Cottalorda, Ambassador of Monaco in France, and by HE Mr Homidjon Nazarov, Ambassador of Tajikistan to France, both mandated by their respective governments. The ceremony, on Friday, January 13, was attended by diplomats from both embassies and was held at the Chancellerie Monégasque in Paris. The two Ambassadors welcomed the opening of diplomatic relations and hoped that they would continue existing economic, cultural, sporting and environmental development. They spoke of their experiences on topics of common interest, including water resources management and tourism, which could be developed through bilateral cooperation. The Republic of Tajikistan is the 133rd state to establish diplomatic relations with the Principality of Monaco. READ ALSO: New Year wishes to Monaco’s diplomatic community READ ALSO: Prince gives lunch at Residence of the State Minister