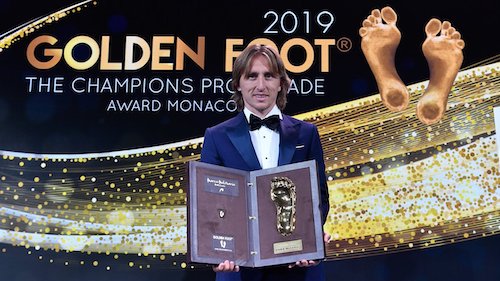 Real Madrid’s Luka Modric has landed the 2019 Golden Foot award, an accolade that recognises the best player aged over 28 who stands out for their on-field achievements, both as an individual and a team player.

Modric collected the award in Monaco on Tuesday night in recognition of his outstanding career, which, amongst other honours, has yielded 15 pieces of silverware with Real Madrid: four Champions League crowns and Club World Cups apiece, a trio of UEFA Super Cups, a LaLiga title, a Copa del Rey and a pair of Spanish Super Cups.

“I’m really happy and it’s an honour to be collecting this award,” said Modric after receiving the award. “Some great players have won it in the past and winning it fills me with great pride”.

The Golden Foot has been awarded annually under the patronage of Prince Albert II of Monaco since 2003. The nominees are chosen by a jury of representatives from specialist media outlets from across the world and the winner is decided by an online vote.