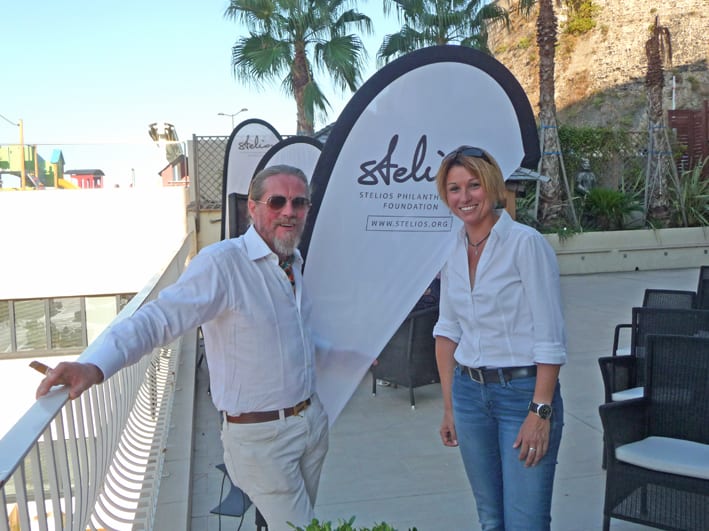 This was a new type of exposure for the association, which usually hosts two events a year, an award-giving ceremony and the AGM.

Monaco resident Christopher Foyle launched the Monaco Air League in November 2013, to act as a chapter of the Air League in the UK (where he’s Deputy President, Overseas), which encourages “air-mindedness” by awarding scholarships to young people to pursue a career in aviation, either as a pilot or engineer.

And Tuesday’s cocktail stuck very much to the aviation theme with two exceptional pilots as guest speakers, Quentin Smith, the first person to fly to both North and South Poles by helicopter, and Melanie Astles, Red Bull Air Race’s first female pilot.

Melanie Astles, born in Rugby, England, to a French mother and English father, moved to Beausoleil, France, when she was three. She attended school in Monaco, but struggled with Maths and so decided to quit and got a job pumping gas at a petrol station in Roquebrune. She stuck with that job for seven years, being promoted to manager along the way, which allowed her to travel around France. Working in Lyon, she was near the flying club. Her lifelong passion for flying – “other girls played with dolls, I was drawing airplanes” – was unleashed as she started to pay for lessons by the hour.

“It was like my heart was speaking,” she reflected upon her first time flying a plane.

It took her years, but she persevered and despite having no money, she was happy. She had accumulated enough flying hours but couldn’t afford the €40,000 for a commercial pilot licence. She applied several times for financial assistance in France, but was rejected repeatedly.

“Until one day I received a letter granting me 90 percent funding. I will never forget that day.”

As luck would have it, Ms Astles passed her licence the same year as the 2007 crisis, and there were no jobs. She continued to fly whenever she could, but as a volunteer. For three years she slept on sofa’s of various friends. In 2011, she got her first full-time job with ENAC, the French Civil Aviation School, as a flight instructor.

The bilingual pilot she finished seventh at the World Advanced Aerobatic Championships in 2014 and first at the female ranking. Last year, in the top aerobatic category, she was ranked 5th best female pilot in the world.

But there was still more. “I wanted to be a pilot for Red Bull Air Race competitions, but no woman had ever been accepted. I just kept trying, and finally in December 2015, after many interviews and tests, I got accepted as a Challenger Cup pilot.”

For six months of the year, the 34-year-old races planes at 400 km/h at 10 metres altitude, completing a course, much like that of the Grand Prix racers.

Melanie Astles, who was issued her first British passport four days ago, now has her own company Air Mel and airplane, for competitions and air shows, but continues to look for sponsors.

“Monaco was one of the first European countries to host an air race. In 1913 and 1914 there were competitions over water here. My dream would be to represent Monaco as a racer.”

Quentin Smith of HQ Aviation Ltd is a product of his lifelong passion for flying: a Guinness World Record Holder, two time Helicopter Aerobatics World Champion, and the first person to both circumnavigate the globe in a helicopter and to fly to both North & South Poles by helicopter.

The fundraising event raised €3,000 from the 120 tickets sold and the honesty bar. Known for his generosity, Sir Stelios doubled the figure and so €6,000 in total was donated Air League of Monaco.

A candidate of any nationality in Monaco or the Alpes-Maritimes can “be offered a rung” on the aviation ladder in France or Monaco through the Air League of Monaco. 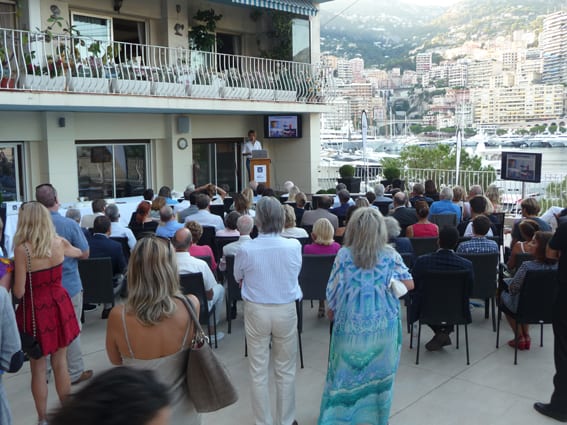 Isabelle Rosabrunetto and Awa Marie Coll Seck sign renewal of support agreement against the fight sickle-cell anaemia in Senegal until 2020 ©DR[/caption] A Monegasque delegation visited Dakar from May 8 to 10 for a working visit focusing on the fight against sickle cell disease (SCD) as part of the strengthening of cooperation between Monaco and Senegal. The fight against sickle-cell anaemia is a flagship programme of the Monegasque Cooperation, the Monaco agency responsible for international aid and cooperation. This haemoglobin genetic disease on the African continent affects 10 percent of the Senegalese population. Extending the 2014 Agreement between the two countries, Isabelle Rosabrunetto, Director General of the Department of External Relations and Cooperation, and HE Awa Marie Coll Seck, Minister of Health and Social Welfare of the Government of Senegal, signed an amendment for its renewal to support the policy to fight SCD in Senegal until 2020. The efforts already made have resulted in good progress. On May 10, on the occasion of the African Sickle Cell Disease Day, Isabelle Rosabrunetto and Ibrahima Wone, Secretary General of the Ministry of Health, inaugurated the Ambulatory Care Unit for Children and Adolescents with Sickle Cell Disease at the Albert Royer Children's Hospital in Dakar. This unit, built thanks to the joint efforts of the two states, will take care of almost 4,000 patients during the next three years. At the same time, the "West Africa-Madagascar Sickle Cell Network", set up since 2013 with the support of the Monegasque Cooperation, met in Dakar for workshops. The Network is composed of doctors and representatives of patient associations from six countries (Senegal, Burkina Faso, Mali, Mauritania, Niger, Madagascar). Its objectives are to harmonise practices and better manage the know-how gained. To this end, tools and strategies for information, awareness and advocacy, as well as a guide for the management of sickle cell patients, are in the process of being developed.

Xavier Niel. Photo: Flickr TNS Sofres[/caption] Flamboyant entrepreneur Xavier Niel – often described as France’s most influential person – is close to finalising a deal to take a majority holding in Eir, Ireland’s biggest telecoms company. Neil, who in 2014 bought the majority stake in Monaco Telecom previously owned by Cable & Wireless Communications, is expected to take a stake of 90 percent currently held by US funds Anchorage Capital and Davidson Kempner and Singapore’s GIC. The deal would value the former state-owned company at €1.5 billion. The transaction is expected to close by the end of the year. The sale would be the sixth change of ownership since 1999. Niel, 50, is the man behind Iliad, the internet service provider and owner of France’s Free mobile service. In addition to his holding in Monaco Telecom, he is also co-owner of the French newspaper Le Monde. He is said to be close to Silicon Valley entrepreneurs Mark Zuckerberg and Elon Musk.