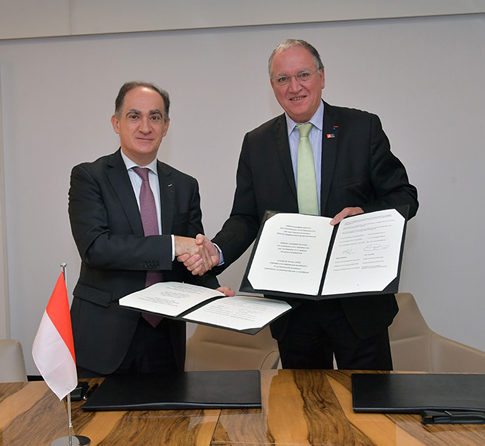 Users of the patent system will be able to request, on the filing of a national patent application, a research report from the European Patent Office and a written opinion on patentability, the whole of which is indispensable for knowing the legal value of an invention.

This signature clearly shows the will of the Prince’s Government not only to support companies in their policy of growth and innovation, through the provision of a powerful new legal tool, but also to continue the process of modernising its national office for industrial property law initiated in 2010.

It’s also an opportunity to highlight the close relations between the European Patent Office and the Principality of Monaco, which have steadily increased in recent years with the first official visit by its President in September 2013, and that of its Senior Director for European and International Cooperation, François-Régis Hannart, in November 2015, on the occasion of which a bilateral cooperation plan was signed to develop the activities of the national office in Monaco.

Local News Stephanie Horsman - June 18, 2021
A new public use facility called A Fabrica has been inaugurated in the heart of Princess Antoinette Park, a space made possible by the generosity of two local donors.

Local News Cassandra Tanti - April 27, 2020
Monaco’s lockdown will be lifted in less than a week and to prepare, the government is equipping several stores in the Principality with masks that can be purchased by the public.