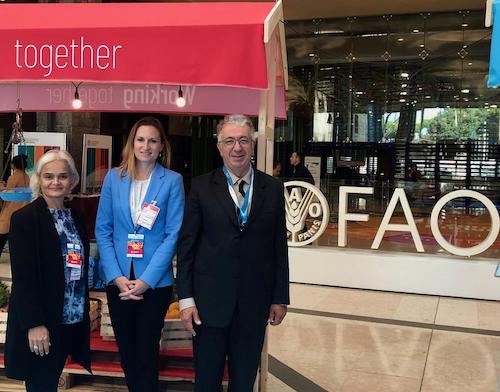 The Committee on World Food Security, the foremost intergovernmental platform to ensure food security and good nutrition for all, met last week in Rome with a Monaco delegation in attendance.

The meeting brought forth two annual reports. One on the state of food security worldwide, which saw a depressing increase in world hunger statistics for the third year running. The report found that more than 820 million people, or one in nine, suffer from the effects of hunger. The second report on the state of food and agriculture, which primarily focuses on lessening food loss and waste, expressed a growing concern about malnutrition and its consequences, including obesity.

World Food Day was also celebrated during the meetings on 16th October and three heads of Rome-based UN Organisations, Italian governmental representatives and a UN special rep on human rights were present. Professor Jeffrey D. Sachs, whose field of study includes analysing the challenges of the least developed Sub-Saharan African countries in relation to food, was an honoured guest.

The President of the Italian Council, Guiseppe Conte, made clear that his nation would be extremely interested in hosting the 2021 World Food Summit, a meeting meant to rally the international community around the challenge of creating a world with zero hunger.

Monaco is currently and actively involved in the fight against hunger as part of its general participation policy. This year alone, the Principality has donated more than €2.6 million in food security and child nutrition programmes in places where the people are particularly vulnerable, mostly African countries, and will continue to show support where needed.