Monaco at the 35th Ministerial Conference of La Francophonie 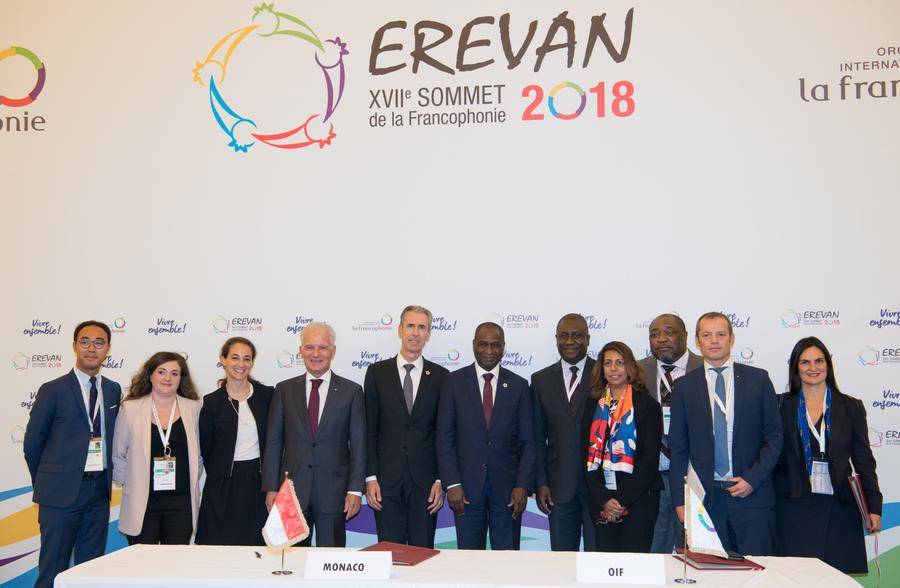 Gilles Tonelli, Government Counselor-Minister of External Relations and Cooperation, led the Monegasque delegation at the 35th session of the Ministerial Conference of la Francophonie, held on 8th and 9th October 2018 in Yerevan (Armenia).

The theme of this conference was: “Living together in solidarity, sharing humanistic values ​​and respect for diversity: a source of peace and prosperity for the Francophone world.”

During his speech, Mr Tonelli recalled that belonging to the French-speaking family underlies adherence to the fundamental values ​​of respect for cultural diversity, cooperation between member states and member governments and the promotion of of the rule of law.

He concluded his remarks by announcing the reception, in October 2019, of the 36th Conference, whose theme will be “Reconciling Humanity and the Planet: Perspectives in the Francophone Space on the eve of the 50th anniversary of the OIF.”

On the occasion of his presence in Yerevan, Gilles Tonelli signed two financing agreements that cover the duration of the next quadrennium (2019-2022), underlining the constant commitment of the Government of Monaco to the Francophonie.

A Day of Horror for France

Local News Staff Writer - July 15, 2016
FRENCH NEWS: (updated 12:14) France was hit on the day of its national celebrations, a day that celebrates freedom, President Francois Hollande has said... Speaking to the nation early on Friday morning, the President said that while there must be absolute vigilance in the face of the Islamist threat, France will increase its involvement in fighting in Iraq and Turkey. The driver of the truck was a 31 year-old Franco-Tunisian, according to police. He is reported to have shouted "allahu akbar" as he jumped from the cab of the truck firing a small-calibre pistol. He was a Nice resident and has been named as Mohamed Lahouaiej Bouhlel, a 31-year-old delivery driver. He was reported to be a French passport holder who lived in the Riviera city and was regularly in trouble with the law. If he was acting alone, this underlines the challenges facing the security services in trying to stop such attacks. Condolences for the victims have flooded in from across the globe. One of the first leaders to do so was Scotland's First Minister, Nicola Sturgeon. American president Obama said his thoughts were with America's "most faithful ally." On a visit to Nice, French interior minister Bernard Cazeneuve called for absolute vigilance in the face of the "extreme violence" of the terrorists. "There were many children among the victims," said Eric Ciotti, member of the French parliamewnt for the Alpes-Maritimes. Local hospitals have issued a request for blood donations.