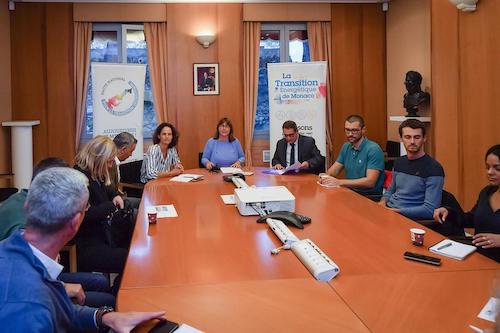 The government has laid out three of the latest organisations in Monaco which are pushing ahead with the Principality’s ambitious energy transition plan.

At the request of Marie-Pierre Gramaglia, Advisor-Minister of Equipment, Environment and Urbanism and the Ministry of State, a press conference was held to update the public on who the actors are that are making efforts to comply with the energy transition plan.

Three primary plans have been undertaken and are being carried out in several businesses and public organisations around the Principality.

The first has to do with transportation and mobility. The Monaco organisation Bike2Work has effectively promoted alternative ways to travel within the Principality. They encourage employees to bike to and from work, and since its inception in 2013, now have 80 adherents, loyally doing their part for the environment.

The next is the government programme recently debuted by the Department of Urban Planning to cut down on waste and encourage recycling. New bins have been placed around the city and the recycling rules streamlined to help residents and make the process simpler. They have also set up a competition dubbed Cliiink, which gives points for glass recycled at the allotted stations, resulting in discounts at local businesses.

Finally, the Monte-Carlo Bay was highlighted for improving energy use due to the recent installations of solar panels, its switch to lower consuming LED lights and its use of the SMART+ energy meter that optimises usage.  They have also signed a contract with Soget Monaco that will see them putting in sustainable heating pumps for creating the most powerful solar plant in the world.

After each presentation, a question and answer session followed, allowing those present to learn more about the specifics and to reiterate the government’s continued support to those making energy-efficient choices.