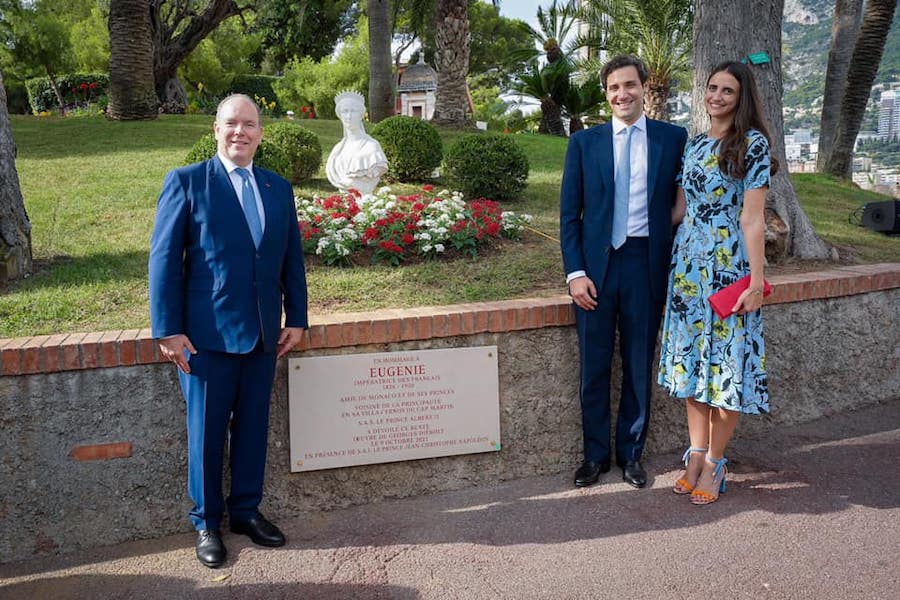 A bust of Empress Eugenie, wife of Napoleon III and Empress of France, has been unveiled by the Prince in Monaco to commemorate the centenary of her death.
Prince Albert II was joined by Prince Jean-Christophe Napoleon and his wife Olympia von Arco-Zinneberg to unveil the statue on Saturday 9th in the gardens above Fort Antoine. The date marks a double anniversary: the Empress’s death in 1920 and the passing of Prince Albert I just two years later in 1922.
The bust will face towards Roquebrune-Cap-Martin and Villa Cyrnos, a treasured home of the Empress in her later years. It was here that she formed a strong bond to the Principality, befriending Prince Albert I and becoming a regular fixture in the area.
Saturday’s event also gave the public an opportunity to get to know more about the Empress and her links to Monaco through a study session and lecture organised by the Empress Eugenie Commemoration Committee and the Souvenir Napoleonic Association. Researchers and experts of the Second Empire took part in the event at the Salle Garnier, a fitting location as it was Napoleon III who commissioned the construction of the building.
Eugenie was born into Spanish nobility and was educated in France, Spain and England. She was a champion of “authoritarian and clerical policies”, many of which made her unpopular with contemporaries, however she came to have an important influence on her husband’s foreign policy.
When her husband was deposed in 1870, the couple fled to England with their only child and lived in exile. Eugenie outlived both her husband and her son, dying at the age of 94 in Madrid.

Photo of Prince Albert II of Monaco, H.A.I. Prince Jean-Christophe Napoléon and his wife Olympia, posing in front of the bust of Empress Eugenie, by Michael Alesi/Communication Department