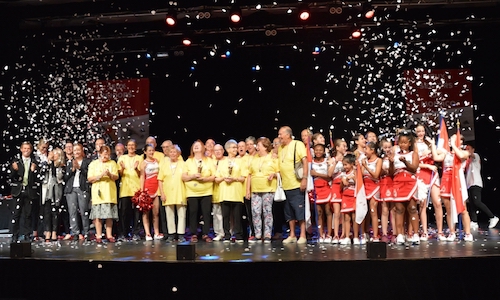 The 3rd edition of the Senior Games was held last week showing that competitive spirit is alive and well amongst the Principality’s young at heart.

Put on by the Monaco City Council Department of Seniors and Social Action, the games were held at the Espace Leo Ferré with four teams competing in three different activities: belote, darts and petanque.

The four teams, Amicale des Aines Monegasques, the Hector Otto Foundation, the Club Le Temps de Vivre and the Recipients of Home Help from the Mairie first met for a luncheon organised by the Town Hall and were treated to an opening speech given by Mayor Georges Marsan.

The games then commenced and were punctuated throughout the afternoon with live performances given by the young dancers of Dolls Stars, who not only entertained the crowd but also served as flag bearers, medal distributors and collectors of scoring sheets.

By 5pm, the winners were announced with the Mayor and several other elected officials in attendance. Club Le Temps de Vivre were the victors in darts but it was the Amicale des Aines Monegasques who came out on top winning both petanque and belote, earning them the Winner’s Trophy for most overall points for the third year running.

The day was a great success all around, and both participants and bystanders await next year’s games.