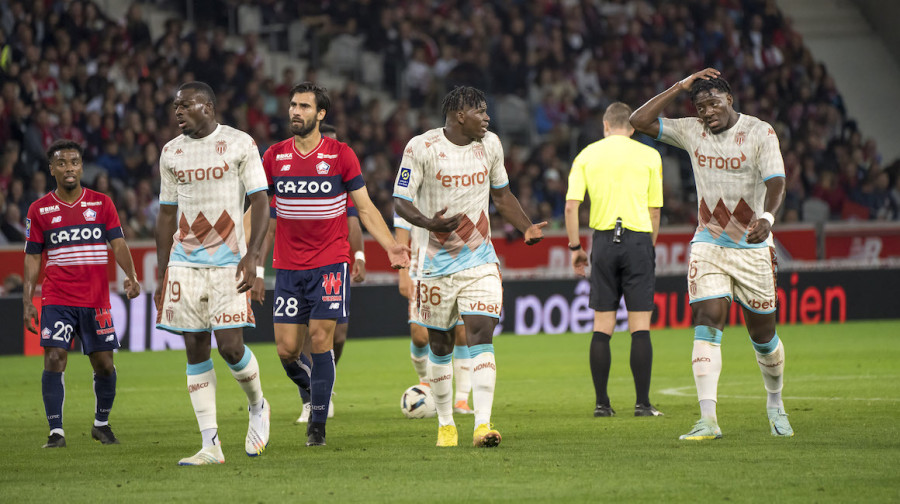 Lille beat Monaco 4-3 in an end-to-end game at the Stade Pierre-Mauroy on Sunday, allowing Paulo Fonseca’s side to leapfrog Les Monégasques in the table.

Pre-match, Monaco manager Philippe Clement said that he expected a “spectacular” match. It was an accurate prognosis., but he would have preferred to have been proven wrong had it meant taking the three points away from their excursion in northern France.

In a back-and-forth first half, Alexsandro’s head gave Lille the lead before a Lucas Chevalier howler gifted Monaco an equaliser, Caio Henrique’s harmless free-kick squirming through his legs.

Rémi Cabella put Lille back ahead after some good work from Jonathan David. Axel Disasi then tied the scores again in the dying seconds of the first half following a knock-down at a corner.

Monaco then took the lead for the first time in the encounter following a Tiago Djaló howler. Wissam Ben Yedder doesn’t need a second invitation, and he slotted away. He perhaps should have done better with a second opportunity just a minute later, but his hesitancy allowed the defender to recover.

On the swivel, Krépin Diatta had the chance to make it 4-2, but his shot was well smothered by the goalkeeper. Monaco would regret those misses. Cabella restored parity before Jonathan Bamba completed the comeback in what was a topsy-turvy, open affair.

The result sees Monaco drop to seventh. Sunday’s opponent leapfrog Clement’s men into sixth, and the Principality side now find themselves six points off the podium.

“As I said before the match, I expected a spectacular match with tow attacking sides looking to win. I think the neutrals enjoyed this tie. We were close to winning it as we had the chances to make it 4-2,” said Clement post-match.

He also regretted the absence of Mohamed Camara, who was suspended for the match. Without him, Monaco struggled to control the field as they often have this season. “We were lacking an important player with the absence of Camara, it is more difficult without him,” he said.

One of the goal scorers on the night, he was a constant threat with his runs in behind, and he took his goal with clinical efficiency. He has little time to impress France manager Didier Deschamps ahead of the World Cup, but he is taking his chances when they come. Only time will whether he has done enough to force his way back into the international setup.

Monaco next face Ferencváros in the Europa League on Thursday in a game that Clement’s side cannot afford to lose.