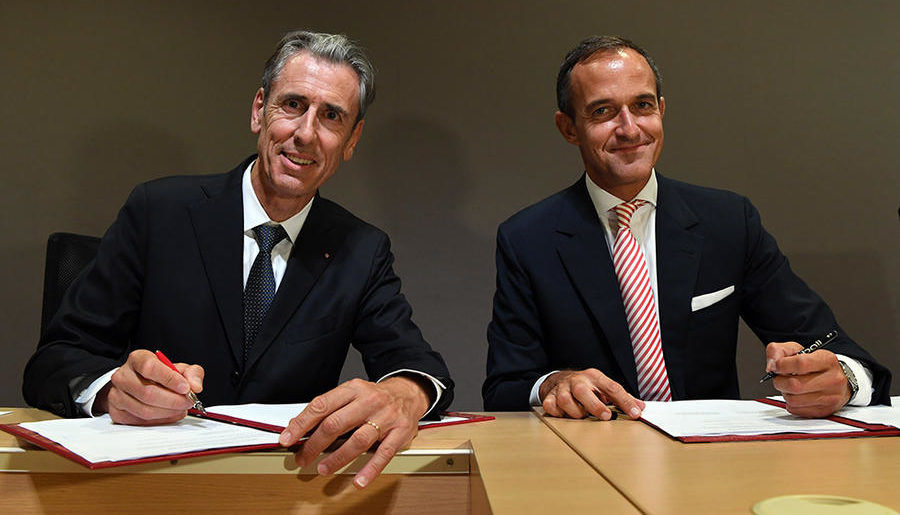 Gilles Tonelli, Minister for Foreign Affairs and Cooperation, and Frédéric Mion, Director of Paris Institute of Political Studies, have signed a new partnership agreement aimed at raising students’ awareness of development issues. The signature took place on the same day as students of the Menton Science Po Paris Campus resumed their studies, on Friday, September 8.

Over the past three years, over 900 young people have benefited from specific lessons, participated in project-building competitions and met with recognised experts in humanitarian and development, thanks to the cooperation of the International Cooperation Department and the Menton Mediterranean Middle East Campus.

In view of the partnership’s undoubted success, the Government of Monaco decided to continue its commitment and to sign a new agreement, with a grant of €200,000.

This contribution will make it possible to organise, during the next three academic years, new initiatives to raise awareness of development, training in project management and to award a scholarship to two deserving students.

The Prince’s Government and Science Po are delighted with this new partnership aimed at developing the civic responsibility of the students who are certain to be tomorrow’s future decision-makers in their country of origin.

Previous articleWhen the sculptures bloom in Monaco
Next articleBack to School this week, with several innovations
Staff Writer

Philipp Plein with rapper Future at New York Fashion Week. Photo: Edward James/ Indigital.tv[/caption] This weekend at New York Fashion Week, Monaco scene regular Philipp Plein birthed his Spring/Summer 2018 collection (Men’s and Women’s collectively) in signature Plein fashion, with an over-the-top runway spectacle and party. Burlesque artist and fashion icon Dita Von Teese splashed around in a crystal martini glass, rapper Future performed, Nicki Minaj sat front row and later performed at the after party. With a stellar and diverse casting featuring supermodels and Victoria’s Secret angels Adriana Lima and Irina Shayk, hip-hop duo Rae Sremmurd, Instagram discovered model Matthew Noszka and singer Teyana Taylor, the German designer wrote us a dark twisted fairytale. With “Good Gone Bad” as a theme, Philipp Plein’s recurrent graphic on T-shirts, T-dresses and crop tops was a BDSM gagged and bound cartoon princess embellished with sequins and crystals in usual Plein fashion. Playing further into the bondage theme, there were lattice leather strap cage skirts and dresses in black and white with daisy appliqués over top gothically romantic gowns and brocade ballroom skirts. Plein staples such as embellished jeans, spiked heels and sneakers, anoraks and moto jackets got the “Good Gone Bad” treatment with embroidered and crystal embellished woodland creatures surrounded by phrases such as “Baby Light My Fire”. [gallery td_select_gallery_slide="slide" size="large" ids="21448,21447,21446,21445,21444,21438,21439,21440,21441,21442,21443,21437,21436,21435,21434,21433,21432,21426,21427,21428,21429,21430,21431,21425,21424,21423,21422,21421,21420,21419,21417,21418"] The Plein logo and leather daisy chokers brought the looks together along with some standout accessories such as a black leather S&M bear backpack, a daisy pacifier, girly frilled socks that played well in contrast to the danger do not touch factor of the spiked pumps, and oversized satin bows sashes as belts. For men, Plein stuck with his classics and updated a few. Mixed in with the 5-figure alligator motorcycle jacket, distressed and/or embellished jeans were two stand out looks, a bomber jacket that closely resembled a thermal blanket was paired with metallic silver waxed jeans and white high top sneakers giving the impression of a very fashion forward astronaut, while the other look a metallic silver waxed denim jacket paired with similar jeans and Chelsea boots gave the vibe of a punk space cowboy. While many either not familiar with Philipp Plein or not a fan of him will dismiss this collection as being way too risqué and off the mark for them, for sure his millions of clients and fans worldwide will love this collection because one thing Philipp Plein does not do is compromise his vision, something that has gotten him exactly where he is today, with a global empire. Philipp Plein’s store is at Centre Commercial Le Metropole, 17 Avenue des Spelugues. Instagram sensation and style blogger Louis Pisano writes SuperficialLivingDiary.com. Article first published September 10, 2017.

Local News Staff Writer - September 4, 2018
The Monaco Yacht Summit will be a key event for end-user clients and their advisors looking to enter or better understand the world of yachting.