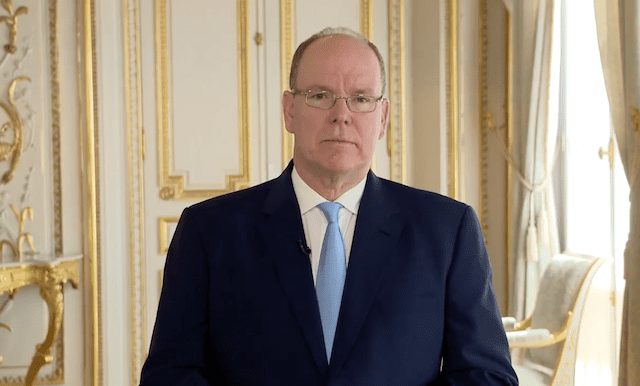 Prince Albert has joined celebrities, world leaders and philanthropists across the globe in pledging to donate funds towards coronavirus testing, vaccines and treatments during an EU-led videoconference on Monday.
European Commission chief Ursula von der Leyen, who hosted the conference, said a vaccine was the best chance of beating the Covid-19 disease, which has so far killed nearly a quarter of a million people around the world – 140,000 of them in Europe.
Joining major European powers, Japan and Canada, Prince Albert answered the call for donations to develop and produce a vaccine. The United States government snubbed Monday’s telethon, however some wealthy American individuals did take part, including pop star Madonna, who contributed $1 million.
In his message, Prince Albert said: “I am convinced that it is only together and united that we will be able to overcome this ordeal which has no equivalent in our recent history. Together and united, we will also have the opportunity to steer the future towards a more sustainable and inclusive path.”
https://www.facebook.com/palaismonaco/videos/232211224775754/


The teleconference narrowly missed its target of €7.5 billion, although some contributors did not put a final sum on their pledges. According to UN chief Antonio Guterres, the amount needed is more in the vicinity of €38 billion.
“These funds are a kind of down payment for the development of new tools at the speed needed,” Guterres told the conference. “But to reach everyone everywhere we likely need five times that amount.”
Regardless, World Health Organisation chief Tedros Adhanom Ghebreyesus called the fundraising a powerful show of “global solidarity”.
President Emmanuel Macron warned that “a race against time is underway,” as he donated €500 million on behalf of France.
Among the larger contributions, the European Commission has pledged €1 billion in grants and €400 million in guarantees on loans. Japan pledged more than €730 million while Germany offered €525 million. The UK pledged £388 million (€441 million). Italy and Spain, perhaps the hardest hit by the virus in Europe, each said they would provide more than €100 million.
Monaco’s contribution to the fund has not yet been revealed by the Palace.
Of the €7.5 billion, four billion will go on vaccine development, two billion on the search for a treatment and 1.5 billion for producing tests, the EU said.