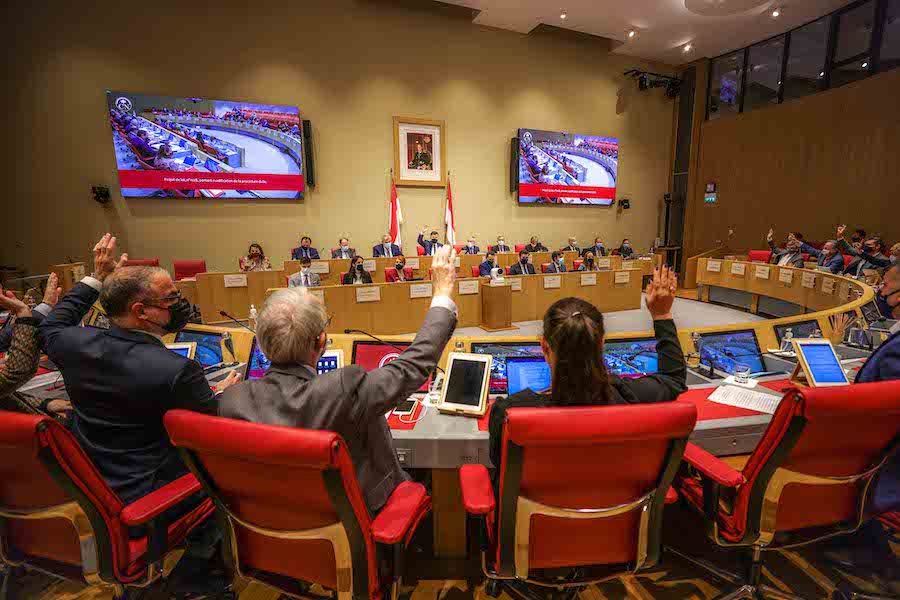 The National Council has voted in favour of a bill that extends the right to Monegasque nationality by marriage from 10 to 20 years, a move which is designed to protect the Principality’s social model.
In his closing address to the Assembly on Wednesday night, National Council President Stephane Valéri said debate on the subject of Monegasque nationality was “both important for our community and sensitive for each and every one of us.”
Valéri said that bill n° 1038 was drafted after a “very broad” consultation with representatives of the community including leaders of associations and political groups such as ‘Primo! Priorité Monaco’ and the Monaco Youth Association. He cited a study by IMSEE that predicted the number of Monegasque nationals would grow by 5,100 in the next 50 years, putting Monaco’s generous social system in jeopardy.
“Let us all be aware of the opportunity, the rights and the advantages that Monegasque nationality confers on those who benefit from it today: low-rent state housing, national housing assistance, priority of employment, priority to professional installation, restricted access for certain regulated professions, very favorable study grants, birth bonuses, support for the most vulnerable among us, and this list is of course not exhaustive,” said the National Council President.
“This exceptional social model, as we know, is envied all over Europe and the world. It was built by the wisdom of our Princes and always supported by the elected representatives of the Monegasques during the successive terms of office of the National Council. It is a precious asset that we must preserve for future generations.”
In 2020, there were 9,753 Monegasque citizens out of a population of around 38,000. According to 2016 figures, 9,300 French people called Monaco home, compared to 8,200 Italians, and 2,795 British.
The last time the law was changed was in 2011 when nationality by marriage rights were extended from five to 10 years.
“20 years is symbolically the time of a generation to fully integrate into our community, to share our identity, our culture and our attachment to the Sovereign Prince and the Princely Family,” concluded the National Council President.
The bill to extend Monegasque nationality rights by marriage from 10 to 20 years was therefore was passed with 16 for, two against, and three abstentions.
In voting against the bill, Pierre Van Klaveren said: “Will we be more likely to be Monegasques, respectful of our culture and history after 20 years rather than 10 years of marriage? I don’t believe so.
“… If we had trusted each other, we could have undoubtedly found new solutions to our problems without having to go through the vote of a text that is in no way the best response to maintaining our social model.”
The bill will now go to the government who will decide whether to vote it into law.