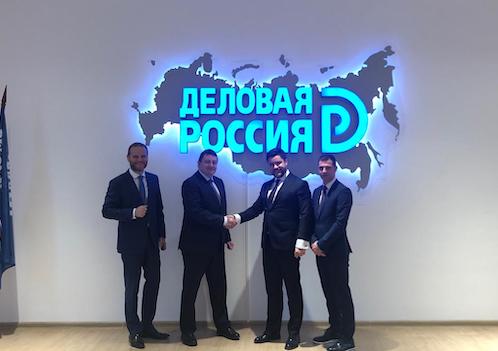 The Monaco Economic Board (MEB) made an exploratory trip to St. Petersburg earlier this month with the aim of expanding trade and creating opportunities for business between the Principality and the former Russian Imperial capital.

The Executive Director of the MEB, Guillaume Rose, and Diego Bonaventura, the Director of the Monaco Chamber of Commerce, took the opportunity to attend a performance of the Ballets de Monte-Carlo in St. Petersburg to meet with business leaders and the primary economic organisations of the city on 14th and 15thNovember.

Representatives from the St Petersburg Chamber of Commerce, the Leningrad regional Chamber of Commerce and Business Russia met with the Monegasque contingent to discuss future possibilities and plan strategies for the official upcoming economic mission taking place in June 2020 during the St. Petersburg International Economic Forum (SPIEF).

The delegation then invited their Russian counterparts to join them for an evening performance of the Monaco Ballet troupe who performed a magnificent tribute to Diaghilev, adding a cultural element showing the bonds already in place between the two places.

The reconnaissance trip forged many new ties and gave the Monaco delegation a vast selection of companies to introduce to members of the MEB in the coming weeks who could become mutually beneficial future partners when they meet at SPIEF.

SPIEF has been held annually since 1997 and from 2006 has been under the patronage of the President of the Russian Federation, Vladimir Putin. For over 20 years, the forum has been an excellent platform for business leaders to meet and discuss fiscal issues facing Russia, emerging markets and the world.

Mr Jean Castellini, Minister of Finance and Economy[/caption] It would be difficult to exaggerate the success of 2016 for the Monegasque economy, a record year for the Principality. Jean Castellini, Minister of Finance and Economy, told the Eco-Club of Monaco-Matin that the Principality is proving its dynamism thanks to the leading economic indicators for last year. Mr Castellini said that several factors combined to make 2016 so successful: the fiscal scenario, tourism, and company formation. A total of 1,300 applications were filed for company formations, he said. "For the fifth consecutive year, we should close the fiscal year in surplus. We reached a record level of revenue in 2016 and the main contributors are tax revenues such as VAT, corporation tax and transfer taxes. Each one testifies to our vitality,” he said.