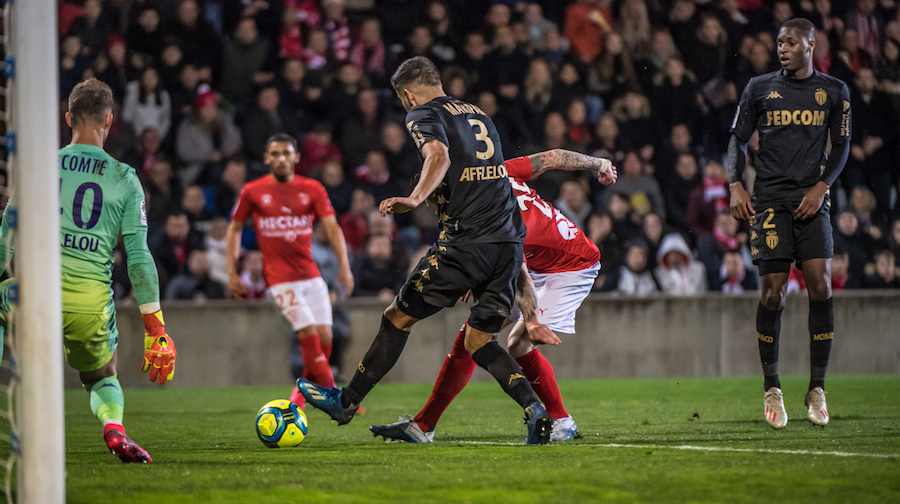 After a promising start, AS Monaco has fallen to Nîmes 1-3 away on Saturday.

The Red and Whites were looking good at the beginning of the match against 19th ranked Nîmes Olympique on Saturday night. A Wissam Ben Yedder goal at the quarter hour mark opened the scoring and put them ahead. It was a spectacular play, tucking the ball between the posts despite an awkward angle, and gave Ben Yedder his 15th goal of the season, whilst giving newbie Fofana the assist.

But then, around the half hour mark, everything went haywire. Florian Miguel evened up the score as Bakayoko fouled Romain Philippoteaux whilst trying to recover the ball after a bit of poor ball control. He got the yellow card for his trouble, but after the play was reviewed on video, the decision was changed, and the referee sent him off. When Gelson Martins stepped in to argue the call, he too was red carded and sent his marching orders and additionally, Fofana was booked as well.

With seriously bad luck on their tails, the Red and Whites were then two men down with 15 minutes still on the clock until halftime, punished for a foul that appeared to many to only warrant a warning. Though struggling, Monaco managed to keep it together and not concede any goals by the half.

After the break, there was some excellent ball-handling on both sides, and at the 62nd minute, all that good play was converted into a goal by Nîmes’s Philippoteaux. Moreno’s men struck back 10 minutes later when Ben Yedder almost made his second goal of the night, but was thwarted by Bernardoni, ostensibly as payback for his earlier goal.

Down by one, the match seemed far from over until the 79th, when Martinez snuck one in from the corner. Sadly, Monaco wasn’t able to even things up again, and in the end the score held firm at 1-3.