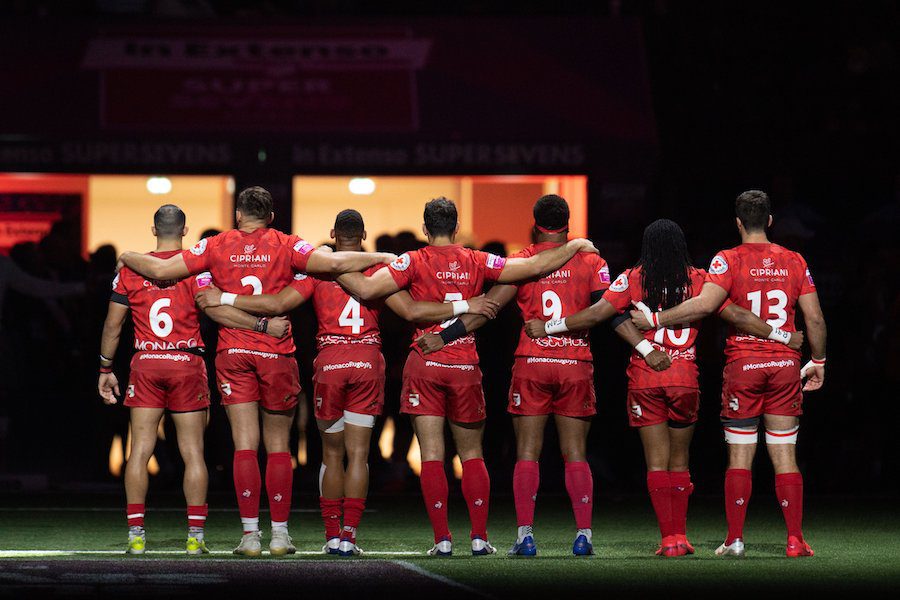 Monaco Rugby Sevens were comprehensively beaten by a dominant Barbarians side in the final of Inferno Super Sevens finals at the La Défense Arena, Paris. Prior to their heavy 14-40 defeat, Monaco had successfully overcome La Rochelle and, most impressively, last season’s champions – Racing 92.

Monaco kicked off proceedings in Paris with their curtain raising fixture against La Rochelle on Saturday afternoon. Having signed only a matter of days ago, Dan Norton and Cecil Afrika didn’t take long to find their feet as they scored the opening two tries for the Monegasque side, having gone behind to La Rochelle’s converted opener.

Missed conversions however meant that Monaco took only a slender lead into half-time. Afrika then extended Monaco’s lead with his second try just after the break, which was duly converted. La Rochelle then pulled one back, but Monaco held on to progress to the semi-final stage, winning 17-12.

Next up was Racing 92, the reigning French champions were hoping to retain their crown, having won the inaugural championship a year earlier. The champions quickly found themselves trailing, however, thanks to a converted Demai-Hamecher try. Racing 92 had the steely determination that saw them lift the trophy last year, and quickly responded, although the try was not converted.

Monaco Sevens extended their lead early in the second-half. McNulty, having had a try disallowed in the dying seconds of the first-half, got his reward this time, as his try was successfully converted. Racing 92 responded with a second unconverted try, but the game was put beyond the champions by Courtaud, whose converted try saw Monaco to a surprisingly comfortable 21-10 victory.

Monaco were to face the Barbarians in the headline act, a team whose imperious form in their quarter-final and semi-final fixtures saw them register a mammoth 74 points in the two fixtures.

The Barbarians wasted no time getting going here either. Without barely allowing Monaco a touch of the ball, the Barbarians scored three converted tries without reply. Dan Norton’s try just before half-time gave Monaco hope of an unlikely comeback. This hope was, however, quickly dashed, as the Barbarian’s blitzed the Monaco side early on in the second-half.

Similarly to the first-half, the Barbarians scored three unanswered tries to extend their lead to 7-40. Courtaud’s late consolation try for Monaco only served to make the final score less emphatic, but with a 14-40 victory, the Barbarians superiority was still plain for all to see.

Despite a disappointing final, Monaco Sevens centre Paulin Riva believes they can still be proud of their efforts, having only finished constructing their side earlier in the week, saying, “We are proud to have reached the final today. The Barbarians are a good, well-run team… We arrived with a week’s preparation. We tried to adapt as well as we could and to create relationships as quickly as possible.”

Monaco will be hoping to build on what, despite a difficult final, was undoubtedly a successful tournament and go one further next year.

Local News Staff Writer - July 30, 2018
The Minister of State went to the Jardins d'Apolline on Monday, July 30, to see the progress of ongoing repair work for himself.