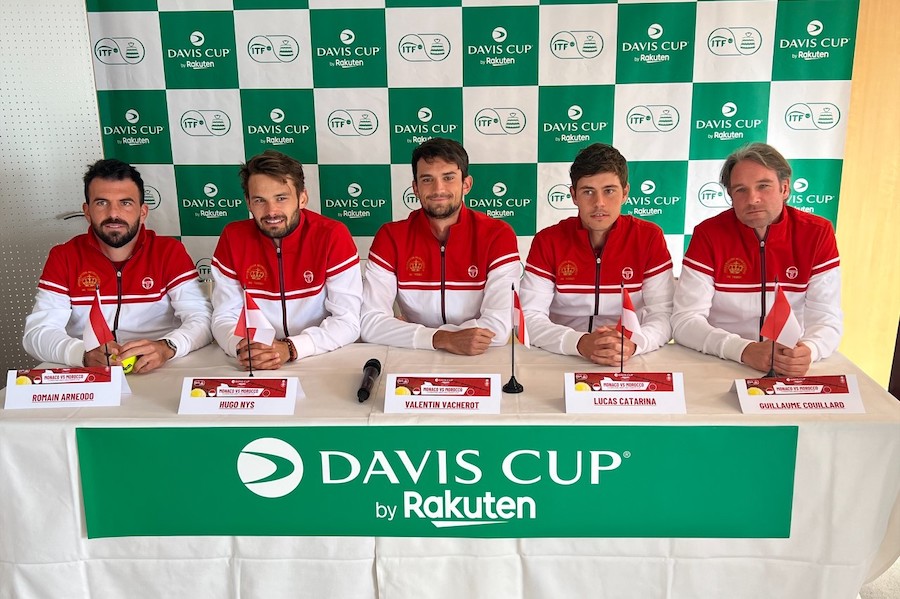 The draw for Monaco’s Davis Cup play-off match against Morocco, which begins on Friday at the Monte-Carlo Country Club, took place on Thursday, with a prestigious September fixture on the line.

Monaco’s number one, Lucas Catarina will face Adam Moundir in the opening fixture of the event, which will span two days at the Monte-Carlo Country Club (MCCC) in Roquebrune-Cap-Martin. Catarina, ranked 393rd in the world, does not feel the pressure of being first out on court. He told the assembled media, “I am proud to play for the team. Playing first or second doesn’t really make a difference, we’ll all do the maximum to win our matches.”

Valentin Vacherot was nominated as Monaco’s number 2 at the press conference, and as such will face Morocco’s number 1, Elliot Benchetrit, on Friday. He sought to point out the importance of playing on home soil. “Clearly, for us, playing in Monaco is an advantage. We would have given everything, if it had been played down in Morocco, but playing in front of our supporters means a bit more to us. It’s been a few years since Monaco have played at home. We are very happy to be here.”

The match was initially scheduled to be played in Morocco, but the current epidemiological situation forced a change in venue for the tie. The winner will go on to play in Group 2 in September, potentially entailing a larger, more prestigious opponent.

Monaco’s captain Guillaume Couillard is aware of the challenge that awaits his side. “The closer the tournament gets, the more concentrated we are. We feel ready for this meeting. We know the opponent we are facing, so we know what to expect.”

There is nonetheless a feeling of confidence within the team that they can get the job done. Monaco’s Hugo Nys, ranked number 51 in the world, in particular, exuded confidence ahead of his doubles match when he said, “We are unbeaten, we are favourites on paper. We’re going to prepare, and the objective is to bring home the point. We are very motivated, very confident.”

In what is at times described as the “World Cup of tennis”, the Davis Cup, which dates back to 1900, is now returning to Monaco’s shores with high expectations for some great tennis over the next couple of days. A Monegasque victory in front of the packed grandstands of the MCCC would be a perfect way to cap its return.

The draw in full: