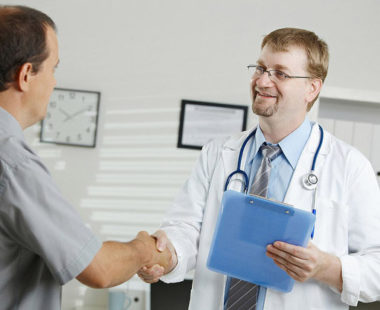 Monaco continues its commitment to the Mars Bleu (“Blue March”) campaign for the prevention and screening of colon cancer, particularly by raising public awareness of colorectal cancer screening. Just like “Pink October”, a time dedicated to the detection of breast cancer, the month of March will be tinted blue for a parallel problem.

This pathology, which is responsible for 18,000 deaths each year in France, mainly affects individuals over the age of fifty. This demographic will be the main target of the awareness campaign in the Principality and in neighbouring countries. This cancer is very common, second only to lung cancer in men, and breast cancer in women.

Colon cancer can be detected despite the absence of symptoms. This campaign for prevention and screening aims at encouraging people to seek a colonoscopy, especially if there is a family history, a “transit” that becomes irregular, unusual intestinal pain or blood appearing in the stool.

A permanent screening program, supported by the Department of Health and Social Affairs, began in 2006. It covers all people between the ages of 50 and 80. Between 2006 and 2015, 30,000 people received an invitation for a test and 12,000 people benefited from the “Hemoccult” test which allows the search for blood in the stool, of which 130 tests proved positive.

In November 2015, a new immunological test replaced the Hemoccult test: it is easier to use and more efficient. The Laboratory of Biology at the Princess Grace Hospital Centre has been equipped with an automated system designed to interpret the immunological tests (OC Sensor).

A total of 1,900 tests were conducted in 2016, of which 56 returned positive and allowed an early and favourable treatment of the affected patients. In the case of a negative test, screening will be repeated every two years. The survival rate of this pathology is closely correlated with the speed of its diagnosis: the earlier it is taken, the less invasive the therapy will be, and the less severe the side effects of the treatment.

Colonoscopy is carried out on an outpatient basis with a very light general anaesthesia and allows an accurate diagnosis: possible discovery of polyps, which can be ablated, or cancer. Colonoscopy and screening significantly decrease the mortality rate of this cancer. The rules of hygiene and dietetics – limiting the consumption of tobacco, alcohol, red meats, and engaging in sporting activities – contribute to the reduction of this contribution to the health vulnerability of Western populations.

Operation “Mars Bleu” 2017, like every year, is able to send out a strong message to highlight the fight against colon cancer. For any questions regarding colon cancer screening, contact +377 97 98 83 02. The Monegasque centre for screening is open Monday through Thursday, from 9 am to 5 pm; and Friday from 9 am to 2 pm.

Butting out in November

US congratulates Monaco, celebrations in Moscow

HE Mireille Pettiti, Ambassador of the Principality of Monaco to the Russian Federation during her address at the Diplomatic Reception in Moscow. Photo: DR[/caption] The US government has congratulated Monaco on the occasion of National Day, celebrated on Sunday, November 19. Secretary of State Rex W. Tillerson wrote: "On behalf of the government of the United States of America, I would like to congratulate the people of Monaco as you celebrate La Fête du Prince. "Monaco has been a trusted partner of the United States since 1866, and our government values the warm relations and enduring friendship between our two countries. By maintaining this partnership, we can continue to advance our joint interests in maintaining peace and expanding prosperity on both sides of the Atlantic." Ties between the two countries were significantly strengthened by the marriage of Prince Rainier to the actress Grace Kelly, who became Princess Grace of Monaco, in 1956. Monaco’s National Day was also celebrated in Moscow. HE Mireille Pettiti, Ambassador of the Principality of Monaco to the Russian Federation, hosted a diplomatic reception on Monday, November 13, at the Ritz-Carlton Hotel in Moscow. The evening was attended by a total of 150 people. Numerous foreign Ambassadors accredited to the Russian Federation, as well as a number of Russian dignitaries took part in this event, including Olga Golodets, Deputy Prime Minister, Alexandre Pankin, Deputy Minister of Foreign Affairs, and Mikhail Shvydkoy, Special Representative of the Russian President for International Cultural Cooperation. In her welcoming speech, Ms Pettiti presented the unique characteristics of the Principality and an outline of the foreign policy of the Prince's Government. She also spoke of the excellent state of bilateral relations between Monaco and Russia.

Local News Staff Writer - July 9, 2018
Monaco, well-known for the excellence of its schools, has just announced a new set of magnificent results for the baccalaureate examinations.