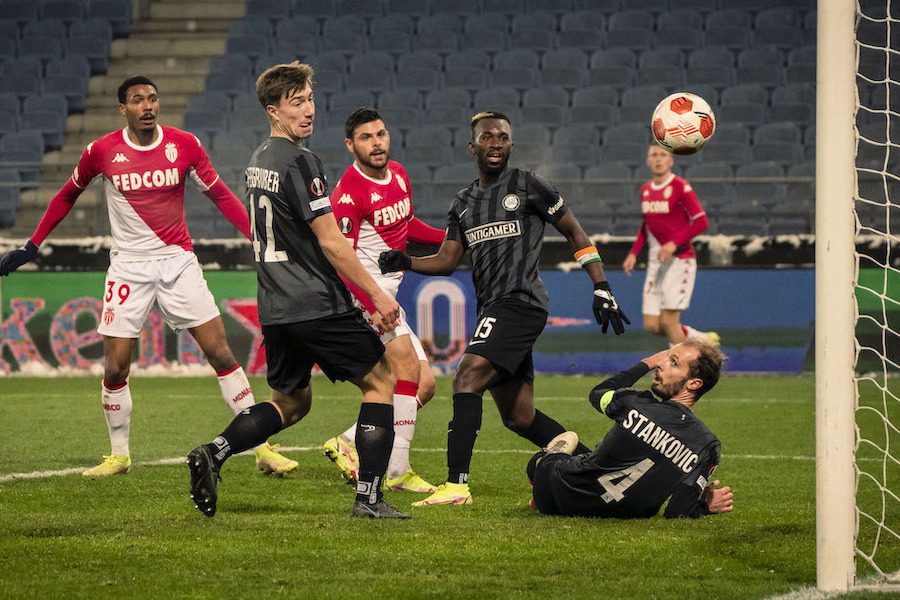 AS Monaco secured a 1-1 draw against Austrian side Sturm Graz in their final Europa League group game on Thursday. The match, played behind closed-doors, was largely inconsequential with the top spot already secured.
The match itself is unlikely to live long in the memory, not least because there was no one there to experience it, due to recently imposed Coronavirus restrictions in Austria. Behind closed-doors fixtures tend to foster a lack of intensity, and this was only accentuated by the fact that this was essentially a dead rubber: Monaco had already qualified for the knockouts, whilst Sturm Graz were firmly rooted to the bottom of the group.
With the huge fixture against PSG on Sunday coming up, Nico Kovac therefore saw the match as an opportunity to give some second-string youth players a chance to shine, whilst resting some star names.
Disappointingly for Kovac, few took the chance. The inexperienced centre-back pairing of Strahinja Pavolivc and Chrislain Matsima did not inspire confidence, the former harshly conceding a penalty in the opening minutes when the ball was fired at his hand from point-blank range. Jakob Jantscher dispatched the penalty past Radoslaw Majecki, who had a shaky game in goal, with his erratic distribution creating numerous opportunities for the Austrian side.
The lead should have been doubled soon after, Matsima this time at fault. His poor defensive header allowed Manprit Sarkaria the opportunity to volley, unpressured from 10 yards out, but he couldn’t direct his shot on target.
Despite all of the youngsters on the pitch, it was the experienced head of Kevin Volland who dragged Monaco back to parity, as he slotted home after a game of pinball in the Sturm Graz box.
Monaco, however, failed to push on from there, the sheer quantity of changes made to the side clearly impacting their cohesiveness as well as the fluency of their attacking patterns. This was most evident with youngster Wilson Isidor, who reassembled the embodiment of a cul-de-sac, through whom it was impossible to advance up the pitch, the ball often being lost or needing to be recycled back through the phases.
Monaco looked more threatening on the counter-attack in the second-half. The young French striker Isidor had the chance to win the match, but his attempt to round the keeper, who was way outside his box was unsuccessful, and the game remained tied at 1-1.
The game was ultimately a non-event, the most important take-away being that Kovac’s side’s ruthlessness earlier in the competition allowed them to rest players for the all important match against PSG at the weekend, for which this game was merely a prelude.
Post-match Kovac was already looking forward to the fixture, saying:“Regarding the changes, it was planned. We had the plan for both halves to give as much game time and rhythm to the maximum number of players…PSG will have had two days extra rest than us, but that isn’t a problem for us because physically, we are one of the best sides in Europe.”
Monaco head to the Parc des Princes in Paris on Sunday evening, and they will take with them a sizable following, with the away-end of the stadium already sold out.