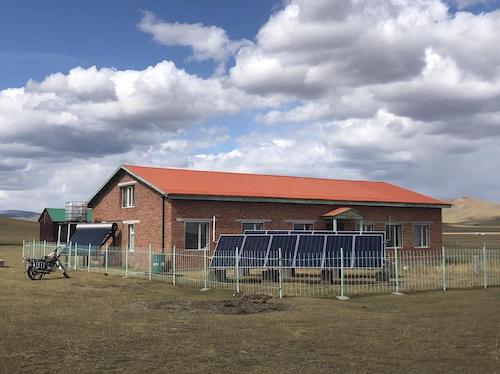 The government of Monaco has installed solar panels at an archaeological research centre in a remote part of Mongolia, bringing reliable light and hot water to the facility where none existed before.

Located eight hours by car from the Mongolian capital city of Ulaanbaatar, the Tsatsyn Ereg Archaeological Research and Exhibition Centre is an unlikely place for Monegasque mission, and an even more unlikely place to be a model for environmental responsibility, yet that is exactly what it is.

The centre is now equipped with a photovoltaic system provided by the Prince’s government that generates up to 4 kWp, enough electricity to supply the building, as well as a solar thermal system for hot water. As this part of Mongolia enjoys nearly 260 days of sunshine per year, the system will be a dependable source year-round.

The staff at the Archaeological Centre have been taught how to maintain and operate the system by the technical partner of the project, GERES (Group for the Environment, Renewable Energy and Solidarity), a French NGO founded in 1976.

The centre is part of a joint operation between the Museum of Prehistoric Anthropology of the Principality and the Institute of the Mongolian Academy of Sciences that has been locating and studying the Bronze Age tombs and petroglyphs of the region since 2006. As a result of these efforts, UNESCO is currently considering the area to be included on the World Heritage Tentative List.