AS Monaco secured an eighth consecutive victory against Lille on Friday (2-1), making them the most form side in Europe’s top five divisions, and certifying their Champions League credentials.

Philippe Clement’s men have provisionally reached second place in the league, although Marseille and Rennes are yet to play, and wins for both sides would relegate Monaco back down to fourth.

Regardless of the results, Monaco’s destiny is once again in their hands and they are not only the most in-form side in France, but also in Europe’s top five divisions. It is also their best run since February-August 2017.

Should they win their two remaining league games, at home against Brest and then away to Lens on the final day of the season, they will most likely find themselves competing in the Champions League next season.

Within that run, Monaco have won matches in style, notably against PSG and Saint-Étienne. But at times they have also had to dig deep and lean on their experience from last season’s Champions League push, as well as on the infallible serenity of their coach, who is a reassuring figure on the touchline in moments of adversity.

This victory certainly goes into the “dig deep” category, as Monaco prevailed against the reigning champions, who despite a troubled season, still have the ability and nous to make things difficult for any opposition.

Monaco were creatively defunct for large periods of the first-half, but still went into the break with a lead to defend. The opener came from an unorthodox source, Aurélien Tchouaméni, a reliable defensive presence in Monaco’s midfield, but certainly not a reliable source of goals, popped up on the edge of the box to dispatch past the helpless Lille goalkeeper.

Lille weren’t beaten and forced their way back to parity in the second-half. Englishman Angel Gomes’ run worked an opening inside the box, which he duly profited from as he curled into the top corner, way out of the reach of Alexander Nubel in the Monaco goal.

There is an air of inevitably to Monaco nowadays, of a powerful unrelenting force that just always seems to have just too much for their opponent, and so it proved again. It was once again Tchouaméni, this time on his stronger right foot, who drove home a spectacular shot from range to give Monaco the advantage once more.

There are strong rumours that this may be Tchouaméni’s last season in the red and white of Monaco, and if this is his swansong, then it’s a beautiful one at that.

From there, Monaco, as they have done so often in recent times, managed the game from there, barely giving Lille a sniff of goal. Clement’s men march-on (1-2), their place in Europe next season now looks more than likely, although in what competition remains to be seen.

Post-match, Clement praised his side’s determination. “It was not our best match, but in my opinion, it was a victory won with the determination and solidarity of the whole team because we gave everything to take these three points.”

Clement added that his side need to remain “focused” and not try to “calculate” as his side go into their penultimate game of the season against Brest, where a victory would mathematically secure some form of European football, not that Clement is paying attention to those calculations. 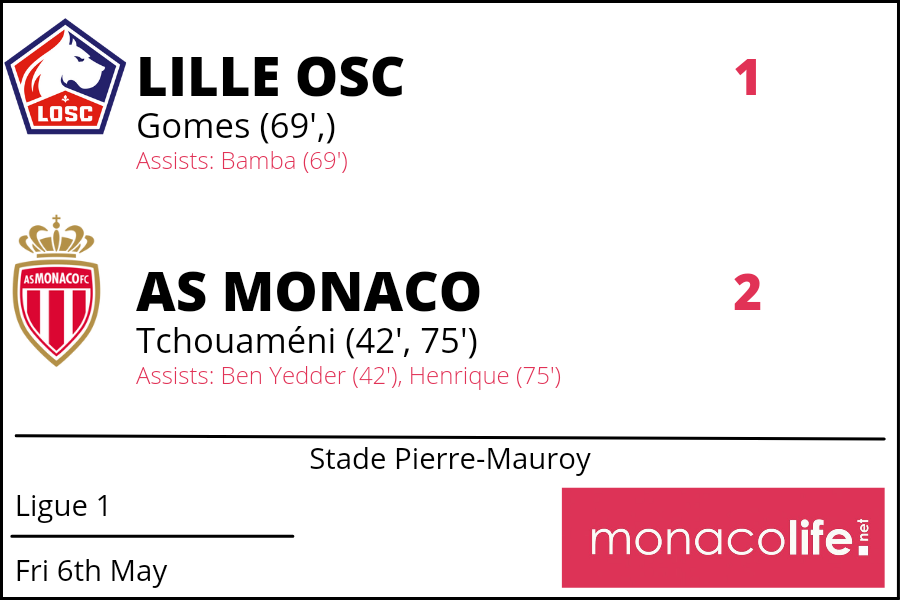