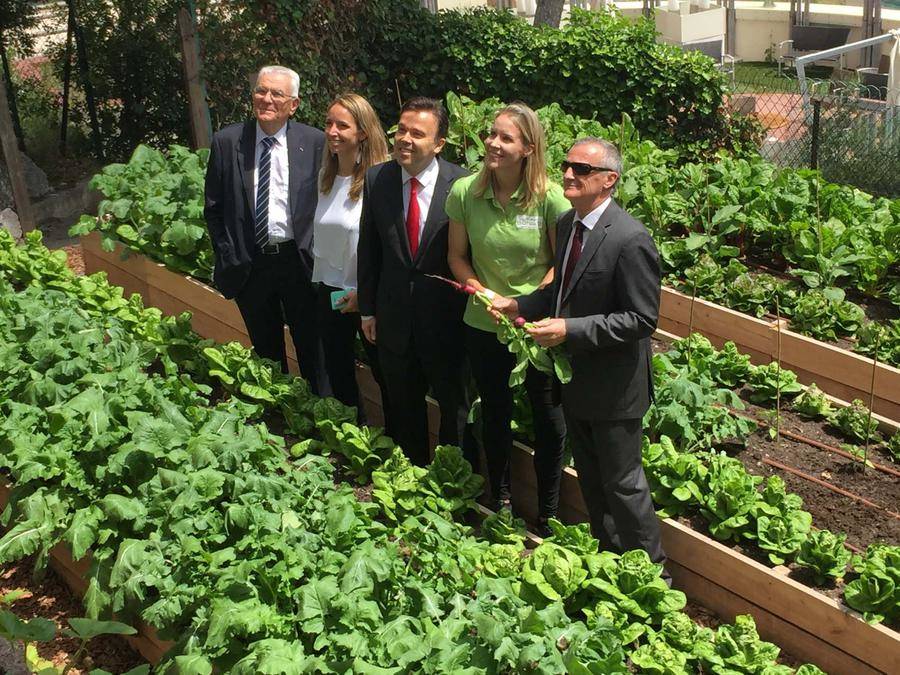 As if its medical excellence was not enough, the Princess Grace Hospital has opened a vegetable garden.

On Monday, May 22, Stéphane Valeri, Minister of Health and Social Affairs, inaugurated the urban vegetable garden of the Princess Grace Hospital Centre, in the presence of André Garino, Chairman of the Board of CHPG, Patrick Bini, Director of CHPG, Benoîte De Sevelinges, Deputy Director, and Jessica Sbaraglia, founder of Terre de Monaco.

Urban agriculture has become an interest for CHPG, which called on the association Terre de Monaco to bring the project to fruition. This partnership led to the creation of a 250sqm vegetable garden, whose healthy and tasty produce is destined for the kitchen of CHPG’s nursery, retirement homes and staff restaurants.

Two months of work and 20 tons of organic potting soil were necessary to transform unused land into a real farm in the heart of Monaco. This approach is part of CHPG’s Sustainable Development policy, which since 2010 has been developing innovations and projects, aimed both at saving energy and reducing its environmental impact.

Terre de Monaco has set itself the task of establishing urban agriculture, in particular ecological fruit and vegetable gardens, on the rooftops, balconies and the surroundings of buildings of the Principality and neighbouring municipalities, while marketing the produce from its small farms under its own label.

Tomatoes on the roof

Local News Nancy Heslin - May 21, 2017
[video width="480" height="272" m4v="https://monacolife.net/wp-content/uploads/2017/05/IsabellKristensenCannes.m4v"][/video] Isabell Kristensen, the Danish designer who has a boutique in Monaco and London, took her fashion to the runway for the first time in Cannes on Saturday, May 20. Ms Kristensen told Monaco Life that she chose the Mariott Hotel to host the event during the Cannes Film Festival because the number of confirmed guests, some 200, was higher than her team had anticipated. One of the iconic hotels on the Croisette, the Mariott, where one night in the Presidential Suite mid-July costs €13,500, was able to provide a terrace for a pre-show cocktail, space for Ms Kristensen’s first-ever pop-up, located on the first floor facing the lobby, and the location of Jean-Roch’s VIP Room Cannes as the venue for the fashion show itself. [caption id="attachment_16852" align="alignnone" width="850"] 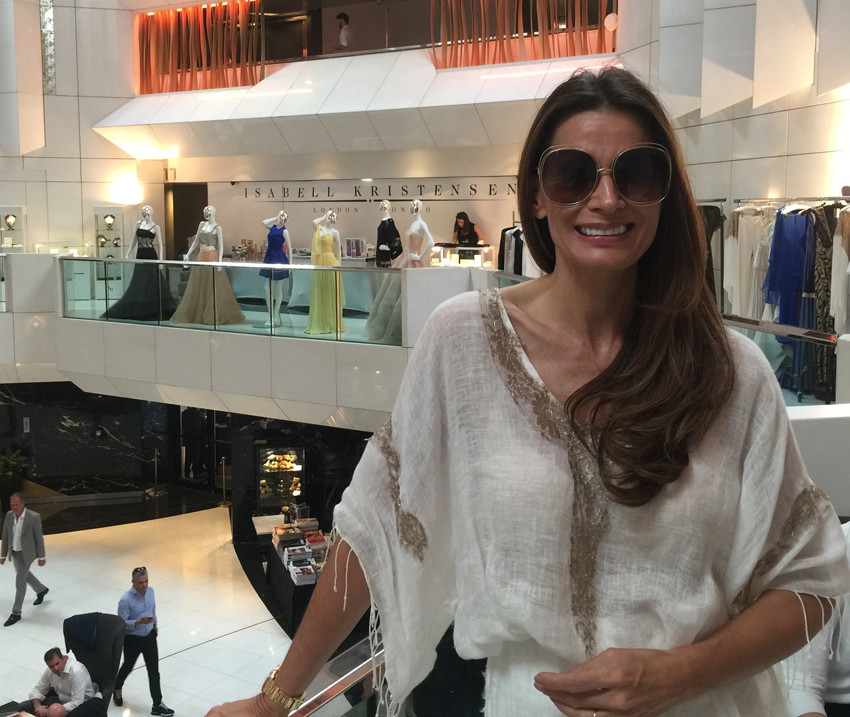 Isabelle Kristensen at her first pop-up shop at the Marriot in Cannes[/caption] “I have never done a fashion show in a nightclub,” said Ms Kristensen, who runs her business with her son Martin, one of her four children. As graceful on the inside as out, Ms Kristensen, who was Princess Charlene's maid of honour, personally greeted every invitee as they arrived for the 5 pm cocktail on the terrace. There were many Monaco faces sipping champagne, although a few actresses who were wearing Isabell Kristensen dresses stood out in the crowd.
These included German-born Sanny van Heteren, who divides her time acting between LA and Berlin. She talked to Monaco Life about Isabell Kristensen as a designer. “I love her stuff because she has really elegant dresses but with a little bit of edge. It’s hard to find carpet material that works as a lot of stuff is either too simple or too extravagant, but she has the blend for a perfect dress.”
[caption id="attachment_16856" align="alignnone" width="563"] 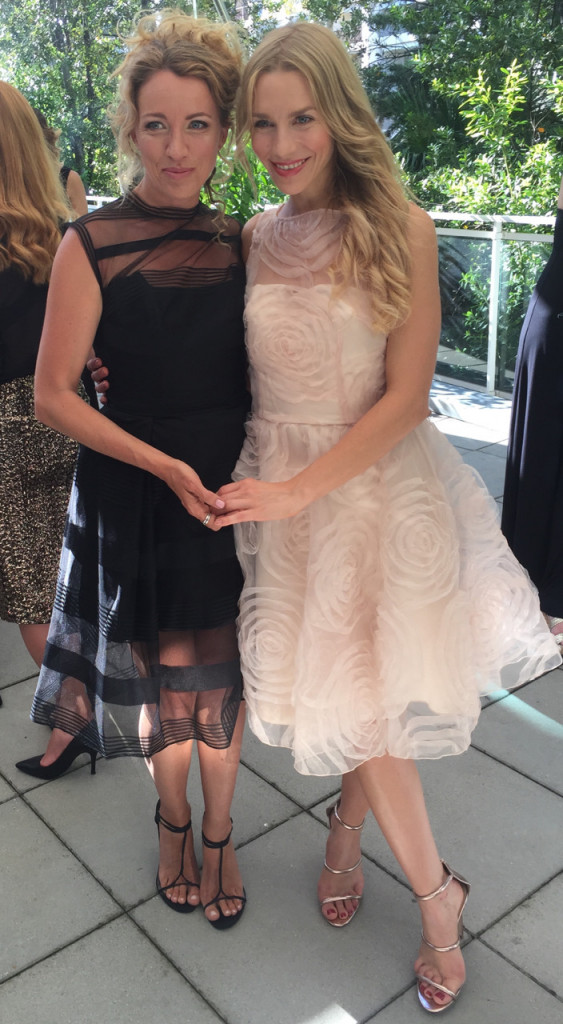 Actress Sanny van Heteren, left, with a pal eacch wearing an Isabell Kristensen design[/caption] A self-confessed tomboy, Ms van Heteren is an avid windsurfer and rock climber “so it’s hard for me to feel feminine”. She explained that wearing a well-made dress feels right and gives you confidence. “This dress has a corset built into it and it’s giving me good posture. A nice dress will make you carry yourself in a certain way.” As guests made their way to the VIP Room at basement level, more trays of champagne formed a reception line before seats were taken. The lights dimmed at 6:20 pm and a sultry version of the Eurythmic’s Sweet Dreams (Are Made of This) kicked off the flawlessly timed production. Twenty models sashayed, twirled, and paused in just the right spot, wearing white, black, a splash of green … each item was exquisite, as expressed by the reaction of oohs and ahhs from the audience, rounded off with a rapturous round of applause and bravos when Ms Kristensen appeared at the finalé. Several women wishfully remarked they would have bought every one of the dresses from the show, and visits to her boutique at Rue Princesse Marie de Lorraine seem on the horizon. [caption id="attachment_16849" align="alignnone" width="709"] 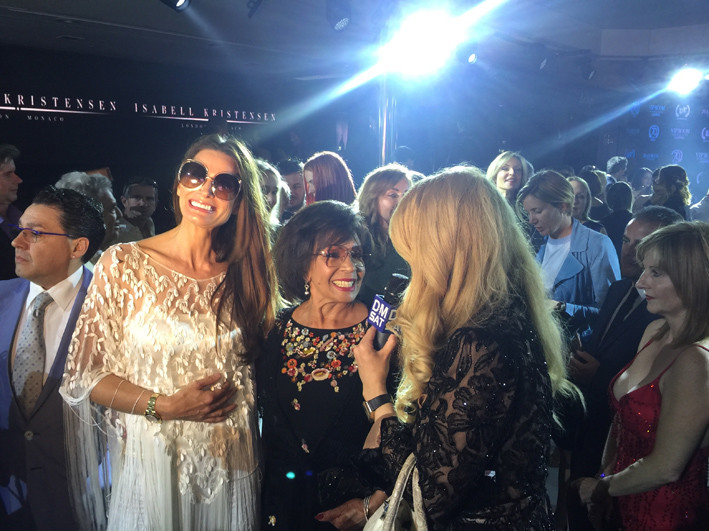 Isabelle Kristensen with Dame Shirley Bassey[/caption] Dame Shirley Bassey, who was the first celebrity Ms Kristensen dressed and a long-time friend of the designer, was also in the audience. Using the fashion we are seeing on the Red Carpet in Cannes as an example, Dame Bassey commented that there are many bad designers out there, relying on slits and too much exposed skin to sell their dresses. Mr Kristensen, she said, sells elegance and femininity. “When Isabell made the gold dress for my Oscar performance of Goldfinger [in 2013], I could move in it, I could lift my arms and nothing came out." Turning to her good friend, she added, “Isabell is about charm and class.” Article first published May 21, 2017.