From July 3 to 5, Monaco has been hosting a meeting organised by the Scientific Committee for Antarctic Research (SCAR), the Prince’s government, the Monaco Scientific Centre (CSM) and Monash University, of Melbourne, Australia.

In her opening address, Isabelle Rosabrunetto, Director-General of the Department of Foreign Affairs and Cooperation, said that since 2015 the international community has adopted a number of major decisions that will play a role in preserving the Antarctic region. These include Agenda 2030 and the 17 Sustainable Development Goals and the Paris Agreement.

The objective of this week’s gathering, which brings together 22 international experts in the fields of law, science, ecology, conservation and ecosystem management, is to identify feasible strategies and action plans that could be implemented by 2020 to strengthen the conservation and protection of biodiversity in the Antarctic and sub-Antarctic regions.

It follows the first edition of the workshop entitled “Antarctica and the Strategic Plan for Biological Diversity 2011-2020: the Monaco Evaluation”, held in June 2015 in Monaco. This has been published in the international journal PLoS Biology. 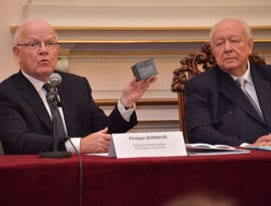