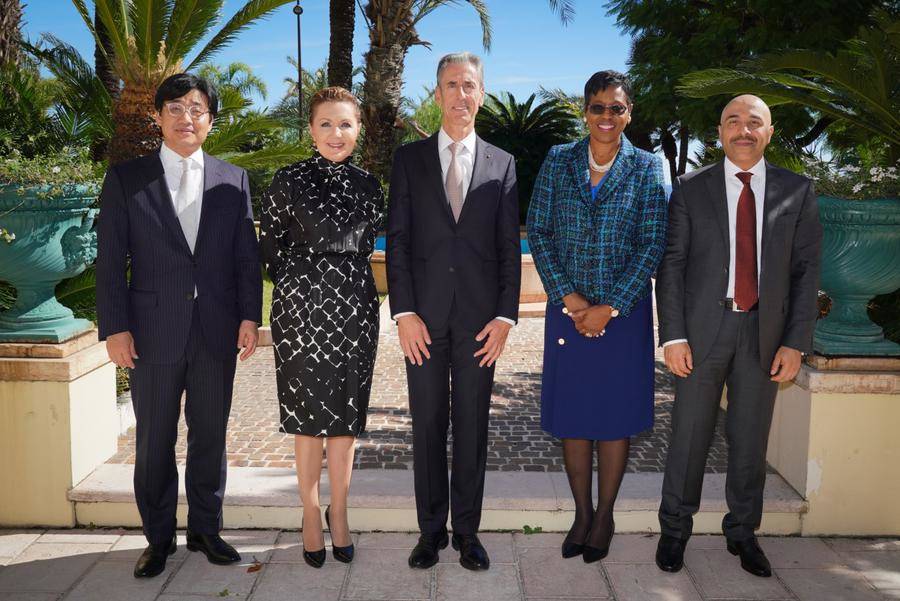 Mr. Gilles Tonelli, Counselor-Minister of External Relations and Cooperation, hosted a luncheon on 2 October for extraordinary ambassadors from Greece, Kuwait, Jamaica and Korea.

The luncheon at the Hermitage Hotel, was attended by HE Mrs. Aglaia Balta of the Hellenic Republic; HE Sami Mohammad Al-Sulaiman of the State of Kuwait; HE Mrs. Sheila Sealy Monteith of Jamaica and HE Mr. Jong-moon Choi of the Republic of Korea.

After two years at the MAE, HE Sami Mohammad Al-Sulaiman, in 1987, joined the Kuwaiti Embassy in Athens, where he climbed the ladder. In 2000, he joined the Embassy in Turkey as Head of Mission, then he was appointed Deputy Director at the MFA in 2002. He subsequently served as Ambassador successively in Sweden, Norway, Iceland, in Denmark, India and Nepal.

During her 31-year career in the Ministry of Foreign Affairs, HE Mrs. Sheila Sealy Monteith has been appointed to the post of Director of the Department of International Organizations, Acting Permanent Secretary, Undersecretary of the Division of Multilateral Affairs at MFA and Jamaican Foreign Trade and Permanent Representative International Sea-Bed.

HE Mr Jong-moon Choi joined the AEM in 1983, he became Director of the South West Asia and Oceania Division in 2000. He then took up the post of Director General of Planning and Management. of South Asia and Peaceful Affairs before being appointed Korean Ambassador to Sri Lanka. In 2005, he became Special Advisor to the Minister of Foreign Affairs. He is Assistant Minister in charge of Multilateral Affairs since 2016.

Local News Cassandra Tanti - January 28, 2021
Much was achieved by RAMOGE in 2019-20 in its fight against Med marine pollution. Now, projects have been set for the years ahead, including a new eco-responsible yachting label.