The Monaco-Ireland Arts Society will be performing two modern plays on Friday, March 16, Stones in his Pockets by Marie Jones, and Ritual for Dolls by George MacEwan Green.

With just two actors playing over a dozen parts, Stones in his Pockets is a comedic yet tragic take on the effects of the Hollywood dream in a small Irish town. Written by Jones, the play is a sad, hilarious and irresistible two-man show about the filming of a Hollywood epic in rural Ireland. A pair of extras, Charlie and Jake, tell the story by taking on all the roles themselves, an ingenious theatrical trick that has a political kick.

Entr’acte, Ritual for Dolls tells the story of four toys that lie forgotten in an attic, a tale that bursts with violence through the strait-lacing of Victorian society, as a golliwog, a toy soldier, a doll and a monkey with a drum each night re-enact the intense events in the lives of the brother and sister who had owned them.

The 8:30 pm event, which takes place at Auditorium Collège Charles III (parking opposite), is presented by the Monaco-Ireland Arts Society, now in its 24th year. “We are a small group of actors committed to presenting our local audiences with the works of Irish authors and playwrights.

‘We spend many months rehearsing our dramatised costumed play-readings and have produced evenings on Shaw, Wilde, Friel, Synge, and many other well-known authors.”

The March 16 evening, like all of the Monaco-Ireland Arts Society events, are free of charge. “We rely on the memberships to continue our work.”

Membership to the Monaco-Ireland Arts Society is only €15/year. Download an application form here. 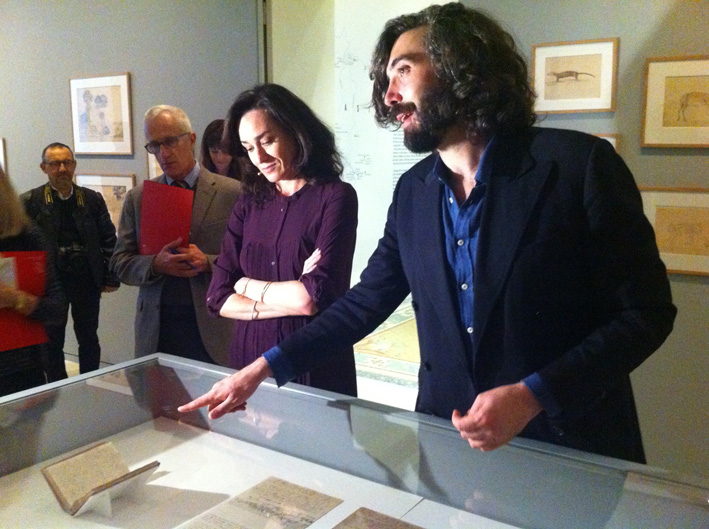 Curators Linda Fregni Nagler and Cristiano Raimondi[/caption] “Hercule Florence, the new Robinson”, has opened at Villa Paloma and runs until June 11.The exhibition is the result of a five-year research project on the work of Brazilian inventor and artist Hercule Florence (1804-1879), presenting it for the first time to the European public. Linda Fregni Nagler and Cristiano Raimondi serve as curators of this exhibition, which will be accompanied by a publication bringing together many international contributions. Inventor of zoophony, a system of musical notation of bird songs, and polygraphy, a method of printing based on the principles of photography, Hercule Florence developed a photographic process as early as 1833 in Brazil, irrespective of the research carried out in Europe at the time, and was the first to use the term "photography". The drawings and manuscripts of Hercules Florence, as well as the first photographic copy of the history of the Americas, are gathered together for the first time in the same exhibition, which is partnered with Van Cleef & Arpels and UBS Monaco. This very complete panorama makes it possible to retrace the development of the thought and work of Hercules Florence. His method, which involves copying, drawing and reproduction, whether manual or automatic, is the central theme of the exhibition. The necessity of reproducing his own works in some quantity led Florence to invent printing systems which might offer an alternative to engraving, such as photography. The project aims to make this famous person his true place in the history of culture, and more particularly of photography, while showing the relationship between his approach and that of his peers. An in-depth study of the origins of photography makes it possible to take a major step forward in the understanding of this complex figure. Open daily from 10 am to 6 pm (€6) with free admission every Sunday, with the added incentive of a reading of Hercules Florence manuscripts for visitors at 4 pm.

Step by Step exhibition – an artistic...

Culture Staff Writer - April 29, 2019
The New National Museum of Monaco is currently featuring the private collection of Fabrizio Moretti, taking the public on a journey through six centuries of art history.