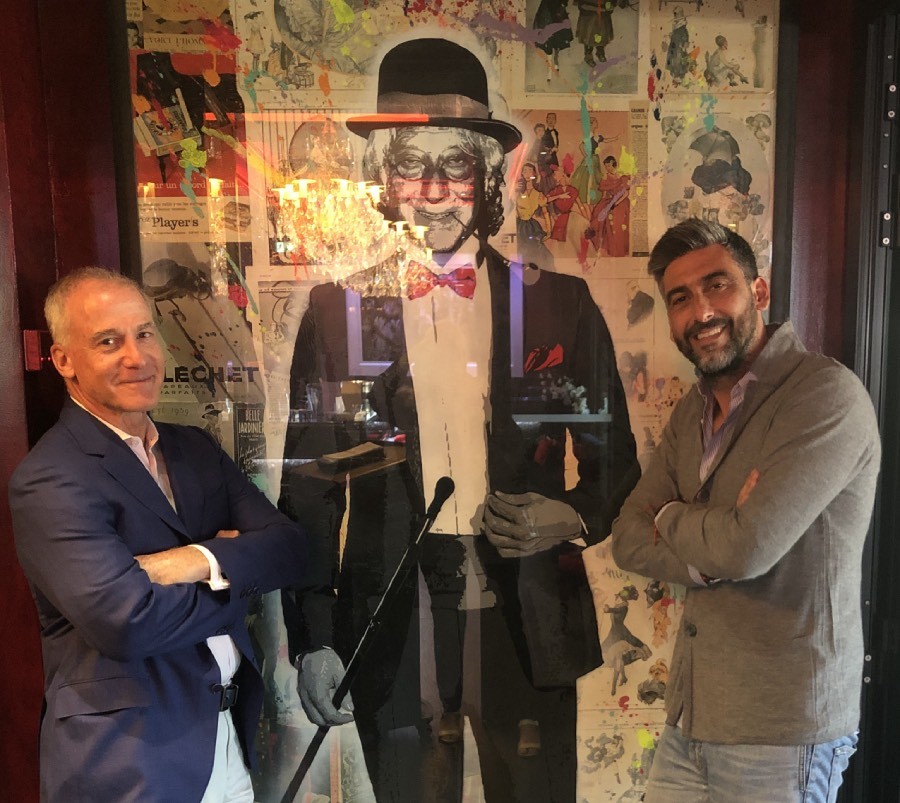 Monaco Life sat down with Samy Sass at his newly renovated restaurant Sass Café to talk about what it takes to create a legend in Monaco, and keep it thriving for more than two decades. The secret, revealed Samy, is all in the DNA.

Samy, tell us about the new opening, why did you feel the need to update?

Sass has existed for 25 years. My father created it in 1993 and I started working with him in 1998. Every four to five years we have always given Sass a facelift, closing for a month or two to change a few things. But this update has been a lot of work. We have literally knocked down everything. We redid the kitchen because that was too small, we redid the back office and air conditioning, we improved the sound proofing because we live below 240 apartments and this area was never made for what it is today. Where we are sitting right now used to be a garden.

We closed from the beginning of December until the end of March. I used to have a professional decorator who would freshen it up, but this time I wanted to use someone who wasn’t from the industry. So I asked Tina Green, the wife of Sir Philip Green, to redo Sass. She said “This is not my job”, and I replied “that is the reason why I want you to do it!”

So together with Pietro Mingarelli, they have achieved what you see today. And since we opened we have only had amazing feedback. People are coming back, and that’s the most important thing.

What is different about the new-look Sass Café?

We have given an upgrade to Sass, but the DNA is the same. People come and say “You haven’t changed anything!”, which is true and not true. But to some degree I am happy to hear that because it means we haven’t lost the DNA of Sass. It’s like we’ve moved from Business to First Class.

Sass is one of the very few family-run restaurant/bars in Monaco. Why is that important?

It’s important because when you go to a family business, it feels like you are part of the family. I want people to feel like they are at home here. My dad is turning 82 this year and he is still here every night, he has his own chair and table, and that makes it special. I feel the same if I go somewhere, I am happy to see the same people. Look I am not saying it’s all great because it is a very hard job. The business is really above you, you are not above the business. You are a prisoner of your business. Because if you take out my dad, with all due respect to all the staff here, but if you take out my dad and myself, it will change the vision. At the end of the day, we like to treat people like they are at home.

Let’s go back to the beginning. When was Sass Café born and what do you remember from those early days?

I remember that it was a completely different time. Why did my father create this restaurant? Because he was going out a lot, every night, and at some point people told him “Sassa you should open your own bar!”. And so he thought, “Every time I am going out to dinner, we start at 9pm and finish at 11pm, then the nightclub is only good at 1am. There is nothing between dinner and the nightclubs”. So that’s why he decided to create something between. Then he introduced live music, which no one was doing apart from the Hôtel de Paris.

But what I remember is it was difficult, it took four years to get off the ground. What people don’t realise is that now, with social media, a place is famous before even opening. In the past when there was no social networking, the concierge at a hotel had an amazing role and I remember you would come down from the room and say to the concierge, “What should I do tonight?”. You don’t have that anymore. You ask them to book the restaurant for you that you already know about from social networks.

What are some of the standout moments for you?

Every day could be something special at Sass, you can’t plan what is going to happen. For example, on a quiet Tuesday night my dad was standing outside and a woman showed up with this crazy hair, glasses, and a dress like the entrance of a gallery. It was Lady Gaga, and no one even knew she was in town, she just showed up. Michael Jordan comes here often, he is a very good friend, and while he’s sitting there Christiano Ronaldo turns up. I have a picture of it, two icons of Nike that had never met eachother before Sass. They partied together until 4 in the morning.

Bono comes here often, he is a very good friend. Sometimes he takes the microphone. Will Smith showed up for the Monaco Formula 1 Grand Prix once and he did a live performance for 40 minutes on the terrace.

So expect the unexpected. This is Sass, you never know what is going to happen. Of course, sometimes we know who is coming, but you never know exactly. We had Donald Trump’s son here last year for dinner, and his 45 security guys.

Hard work, first of all. Then our kitchen, it is not 10/10, it is not 5/10. We try to keep it 7/10, so normal food, normal prices. Then, which is very important for me, it is the atmosphere. I’d rather make less money but have a great atmosphere. If you come one night and its full and people are partying, then this is the best advertising. Also, the way we do the tables. They are very close together so we are always thinking about who we are putting next to who, whether they will match or not.

They were rocking. My mum was pregnant with me dancing at Jimmyz the day before I was born. They are amazing, I am very lucky to have them.

A wave of new, trendy eateries are springing up all over Monaco. What sets Sass apart from the rest?

Once again, we are a family business. People sometimes come to Monaco with a new place and say they are going to get rid of Sass. But why? I don’t think like that. The more business there is in Monaco, the better it is for the Principality. People that come with that vibe, they’ve already lost. With all due respect, Sass cannot be replicated. How do I know that? Because we tried to franchise to Dubai and we couldn’t make it, it worked for a year and a half and then it failed. Today, Sass belongs to Monaco.

Can you tell us about the menu, can we expect something new? Are there any surprises in the new Sass?

But what I would like to share is that Tina and I took over the gallery next door, and a third of that gallery will be linked to Sass. In about eight months, it will open for lunch. So you can eat your meal surrounded by artwork, but it will only be available for 30 covers. At night, the space will be used as an extension of Sass or for private parties. It will be something very special and unique for Monaco.