The Charity Show, the 29th edition of the traditional Christmas Show entirely created by students and professors of the International Option of the Charles III College, took place at the Rainier III Auditorium on Friday, January 20.

This high-quality show, which tells the story of the “Lion King”, allowed the college students and the teaching staff to demonstrate, once again, a real talent in staging and interpretation, and all who took part demonstrated an attachment to the human values of solidarity and generosity.

This year nearly €13,000 were raised and the funds will be entirely dedicated to a major cause, that of the Preventorium, Foyer Rainier III of Madagascar. Nearly 70 children suffering from rickets and malformation are cared for at this institution. After surgery, these children are offered care and rehabilitation before returning to their families.

The Principality contributes financially to the functioning of the Home and the funds collected by the pupils of the College Charles III during the Charity Show constitute two thirds of the total grant awarded. 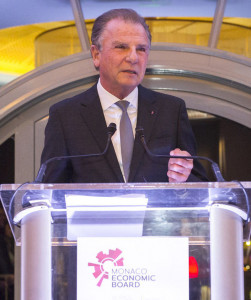 MEB President Michel Dotta. Photo: MEB[/caption] The Monaco Economic Board’s first networking event of the year – Members Rendezvous – attracted 220 companies operating in the Principality, from 16 industry sectors, on Tuesday, February 6, at the Monte-Carlo Bay Hotel. More than 300 gathered to hear the latest news of the MEB’s activities and expand their business contacts. Chairman Michel Dotta said that a total of 51 initiatives ensured that 2017 was a particularly busy and innovative year. Six Trade Missions took place, including, for the first time, a double official mission to Bratislava in Slovakia and Chisinau, Moldova, in May, accompanying official visits by Prince Albert. Taking full advantage of different opportunities, the MEB then organised three missions in three weeks from June 19 to July 8, to Tel Aviv, Israel, Astana in Kazakhstan and Tunis, the largest city in Tunisia. Lastly, a Trade Mission was arranged to Moscow to coincide with performances by the Ballets de Monte-Carlo company at the Bolshoi. In Monaco, the three Members Rendezvous attracted 270 participants on average per meeting compared to 220 in 2016. Starting in September 2017, the MEB added a B2B session before the main networking event, an experience that was repeated on Tuesday, February 6, with more than 60 meetings scheduled involving 56 companies. With some 40 operations already confirmed, 2018 looks set to be as productive. The European continent is the focus for the first half with a Trade Mission to Stockholm in March, for which there is still time to register. Frankfurt is also being studied for June and could be confirmed on February 22 when HE Meyer Landrut, Germany’s Ambassador in France, comes to Monaco for an Ambassador’s Lunch. In the second half of the year, two trips are planned to Asia accompanying Prince Albert’s official visits. The first is to Beijing in early September for a new culture-business synergy tied in with the inauguration of the Grimaldi Forum’s Princes and Princesses of Monaco exhibition in the Forbidden City, then Hanoi, Vietnam, in November. In 2018, the MEB will embark on a survey to learn more about member companies and gauge their opinions on the economic situation. For Michel Dotta “It’s about constantly improving the quality of services and actions the MEB provides to its 500 members.” MEB is organising the “E-Estonia Conference” – an English-language conference on Estonia’s E-administration and E-services – at MonacoTech on Friday, February 16, at 8:15 am.