Monaco mobilizes for International Day Against Violence against Women 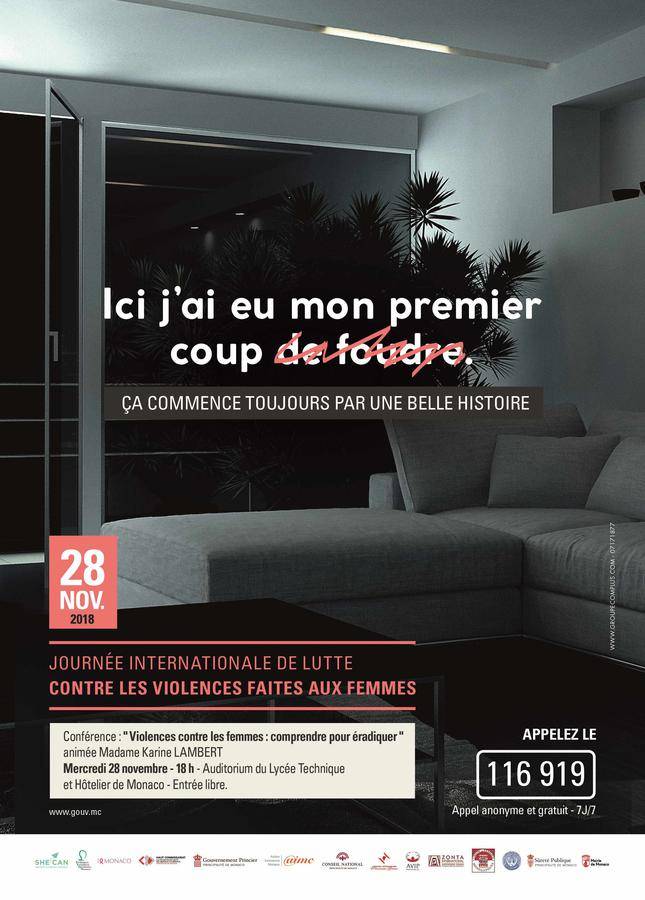 The Principality of Monaco is associated, Wednesday, November 28, 2018, with the International Day of Fight against Violence against Women. At the initiative of the United Nations, this day will remind us of the importance of preventing this violence, of taking care of it through the mechanisms put in place by the Prince’s Government, but also by the associative fabric of the Principality.

Coordinated by the Department of Social Affairs and Health, this day is the result of a joint reflection of the Prince’s Government with the National Council, the Office of the High Commissioner for the Protection of Rights, Freedoms and Mediation, as well as with the associative groups involved in this cause and, in particular, Women World Leaders Monaco, “She can He can”, Pink Ribbon, Action Innocence, the Union of Monegasque Women, the Zonta Club and the Soroptimist Club of Monaco.

There are different forms of violence. They are not always visible and well before jostling and blows often occurs, an escalation of abusive behavior and intimidation. In the Principality, different actors take care of women victims of violence. The Princess Grace Hospital can provide an entry point for these victims, who are cared for and directed by caregivers and social workers, depending on the situation, to the judicial and / or social spheres. The Association for the Assistance of Victims of Criminal Offenses (AVIP), for its part, took charge of 28 cases of domestic and family violence between January and November 2018.

This day will raise awareness through a poster campaign and the organization of a conference for the general public on Wednesday, November 28, 2018, at 18h, at the Auditorium of the Lycée Technique et Hôtelier de Monaco. It will be moderated by Mrs Karine Lambert, Vice-President of the Euro-Mediterranean University and Scientific Network on Women and Gender (RUSEMEG). This year’s theme will be “Violence against women: understanding to eradicate”.

Also in the context of this day dedicated to the fight against violence against women, the Theater Princess Grace has presented, this Thursday, November 22, at 20:30, the play “The Belly of the Whale”, a love story that flips small small in domestic violence. The Belgian author Stanislas Cotton depicts the complex mechanism that leads a couple in this relationship victim / executioner; a poignant and universal performance. The play was followed by an exchange with the audience in the presence of the author and the actress.

Finally, as a sign of solidarity, the emblematic buildings of the Principality will be illuminated in orange (the official color of the “UN Women” campaign) on Sunday, November 25, 2018, International Day Against Violence Against Women.

Local News Cassandra Tanti - July 16, 2019
The Principality of Monaco and the Kingdom of Cambodia have officially established diplomatic relations through the signing of a Joint Communiqué.