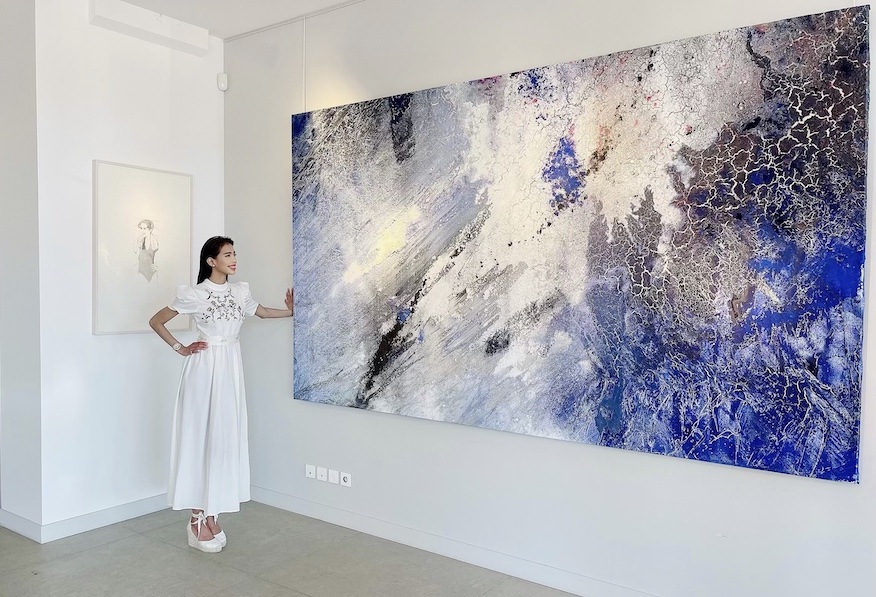 The Monaco Modern Art gallery is the former artist studio of Monegasque personality Phillipe Pastor. Today, his large art works still dominate the space with their texture, imagery and symbolism, but they are now placed alongside other works by international artists like Banksy, René Gruau, Raymond Hains and Valério Adami.

“The idea was to create an exhibition space here in Monaco in partnership with Monaco Modern Art and Artist Agency,” explains curator Rani Vanouska T. Modely. “So, we have beautiful paintings from Phillipe as well as artwork from great international artists, as you see here today, and others will come throughout the summer.”

Pastor’s current exhibition, La Fin du Monde, features a selection of his recent monumental paintings exploring the theme of climate change. The material, worked in multiple layers and subjected to the natural elements, evokes the forces of an unbridled nature, which transcribes the violence and destructive energy of man towards his environment.

The exhibition includes paintings from his series Bleu Monochrome, in tribute to the sea and particularly to the Mediterranean, a territory of inspiration for his works. Integrating pigments and natural elements, these luminous pieces evoke the pollution of the seabed.

“Pastor always has huge canvases on which he plays with fire, water, wind… he leaves it outside for days, so there is a real interaction,” says Modely. “And since we opened the gallery at the end of May, these pieces have received the most attention, passing people are really drawn to them.”

Other works in the gallery include The Clown by Bernard Lorjou (1908-1986), Vintage American Flag by Alec Monopoly, Interno Pubblico by Valério Adami (b1935), Streetopoly by Dean Zeus Colman (b1968), and GDP Rat by Banksy.

The Monaco Modern Art gallery is open to the general public.