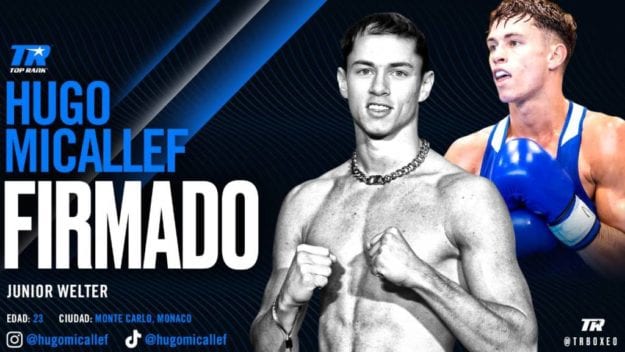 Monaco’s Hugo Micallef has signed a multi-year promotional contract with Top Rank and will be making his professional boxing debut in September at a match in Paris.
The boxing world has dubbed him the Fresh Prince of Monaco, and with more than a hundred amateur victories under his belt, there’s good reason to think he may one day be king.
Hugo Micallef, who is accredited for breaking the glass ceiling in Monegasque boxing, once aspired to be the Principality’s first Olympic boxer but now has set the bar higher looking to become the first to win a world title for his country.
He has just been signed on professionally with Top Rank as a junior welterweight and will be fighting in his first pro match on 10th September in Paris. He is on the same bill as heavyweight contender Tony Yoka who is going toe-to-toe with unbeaten Petar Milas.
“Hugo has everything it takes to be a superstar in the sport,” said Bob Arum, Top Rank’s chairman. “His amateur pedigree is extensive, and I believe he’ll usher in a generation of pro boxing in the Principality of Monaco.”
Micallef, for his part, thinks he is a good fit with the agency, saying, “It’s a tremendous honour to be signed by the best promotional company in the business. I have dreamed of this moment. I’m ready for the start of my professional journey, and I hope to one day bring a world title back home to Monaco.”
He caught the world’s attention last autumn at the Boxam Elite International Boxing Tournament in Spain, taking down America’s amateur star Delante Johnson. His last fight was at the European Olympic Boxing qualifiers in Paris, where he fell in the 16th round to Brit gold medallist Pat McCormack.
Carlos Formento has been called up to be Micallef’s trainer. He has worked successfully with former welterweight world champ Keil Brook and junior welterweight contender Anthony Yigit.
Natural talent coupled with a solid trainer have put him front and centre on the boxing world stage, making the 23-year-old the one to beat.