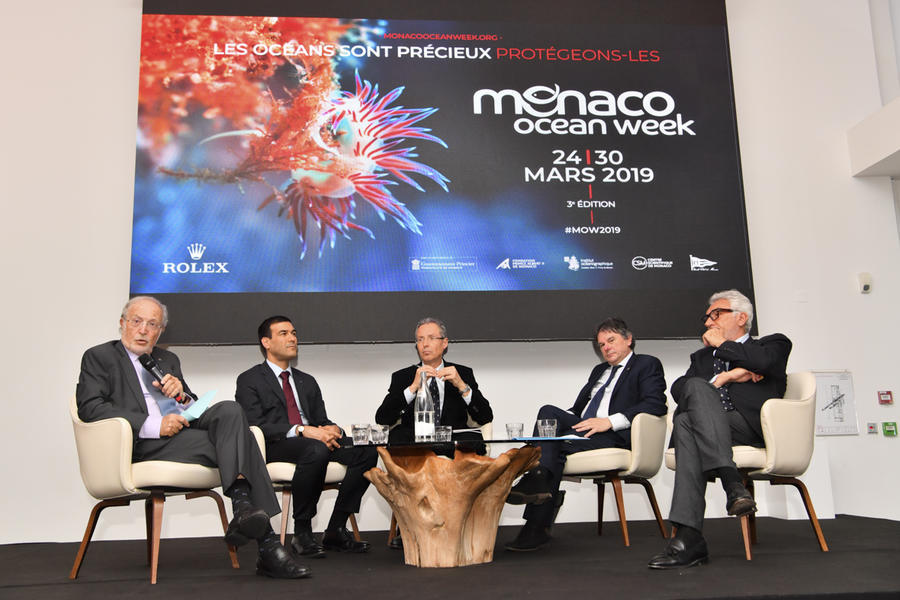 The schedule has been revealed for this year’s Monaco Ocean Week, a local forum that brings together the world’s biggest names in management and protection of the seas.

It’s fairly common knowledge that the Earth is 70% water, but maybe not so common to know that 97% of that water is in our oceans. With this big of a slice of the planetary pie, it would stand to reason that those living in the minority on the other 30% would take better care of their larger cousin, but this sadly is not the case.

The world’s oceans are clogged with pollution, disrupted by over fishing and over aggressive shipping practices and its inhabitants are being systematically killed off as we stand by and let it happen.

From 21st to 26th March, the Prince Albert II of Monaco Foundation and its partners, the Oceanographic Institute of Monaco, the Scientific Centre of Monaco and the Yacht Club of Monaco, with the support of the Prince’s Government, have invited the primary international players in ocean management and protection to meet and discuss topics ranging from plastic pollution, ocean acidification, coral reefs, the blue economy and innovation, the potential of algae, coastal resilience and scientific research.

In all, there will be over 50 events planned during the week, some private but many open to the public.

Amongst the invitation-only highlights of the 5th edition of Monaco Ocean Week will be the Monaco Blue Initiative, an event that will see experts, scientists and other top players addressing the current and future global challenges on 21st March.

Then, on 23rd March, the Ocean Innovators Platform, a private event dedicated to cutting-edge technologies and inventive solutions aiming at conserving the world’s ocean, seas and marine resources, will take place. It will highlight the essential role of entrepreneurship, innovation and investment to develop a sustainable blue economy.

The Yacht Club of Monaco is hosting Capital Day, along with the Belle Classe Symposium, for sustainable yachting practices on 24th March.

Additionally, on 25th March, the Conference of Coastal Resistance ‘Sea and the city, Pathways to coastal resilience’ will be taking place. This seminar will examine the issues, identify the tools for assessing vulnerabilities, and highlight the solutions to be put in place, in particular those based on Nature, to protect and strengthen the resilience of coastal and marine ecosystems in the face of climate change.

The general public can enjoy a variety of exhibitions, conferences, and even reading for the kids.

On 24th of March, a marine biodiversity and gastronomy evening has been organised by the Scientific Centre of Monaco (CSM), where guests will first explore the relationships between marine diversity and beauty, moving their focus to gastronomy and the seas.

On 25th March, the Arktic Circle Exhibition and Conference is taking place at the meeting room of the Monaco Yacht Club. After several years of observations, environmentalist and photographer Olivier Anrigo, takes guests on an expedition to Norway, Lapland, and Spitsbergen. These lands are today threatened by global warming, and the conference aims to make people aware of the urgency, as well as to bring hope due to the actions being put in place to preserve them.

There will also be an avant-premiere of the Mediterranean documentary series, Odyssey for Life, which reveals the wonders of the world whilst showing its fragility. At sea, on land and in the air, the audience will go on a fascinating journey through the world of animals and plants that have adapted to continue to live in the Mediterranean, despite the growing impact of human activities. The viewing will be at the Princess Grace Theatre, by reservation only.

For the littlest visitors, the Monaco Media Library will host a book reading on 25th March of one of the adventures of the ‘Ice the Bear’ trilogy. The story revolves around a travelling bear who encounters different environmental issues through his experiences. After the reading, there will be quizzes and drawing competitions for children aged five to 10.

Spaces for many events are limited, so reservations are recommended. For a full listing of the programme for the week and to save a space, visit https://www.monacooceanweek.org/en/program/

Photo of the 2019 edition of Monaco Ocean Week, from left to right: Bernard Fautrier, former Vice-President of the Prince Albert II of Monaco Foundation; Cyril Gomez, Director General of the Department of Equipment, Environment and Urban Planning; Robert Calcagno, Director General of the Oceanographic Institute; Denis Allemand, Director of the Monaco Scientific Center and Bernard d’Alessandri, Managing Director and General Secretary of the Yacht Club of Monaco. By Communication Department/Manuel Vitali