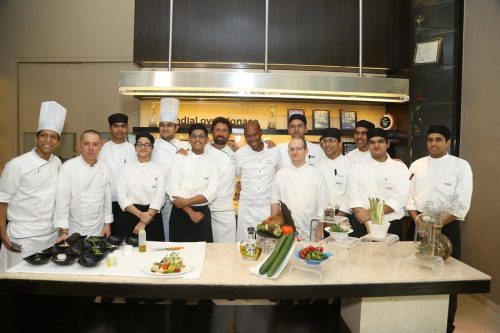 Monegasque gastronomic fare took a trip to the subcontinent for four days in September to present the Monaco Organic Food Fair in the vibrant “city of all dreams”, Mumbai.

Themed ‘From Monaco with love’, the Indian audience was soon inspired by the cuisine of the Principality and the charm of Mr Ravin, who over the course of four days was able to offer his creations to local celebrities, industry leaders, and representatives from the media.

At a press lunch, given by the Monaco Representation Office of India, the Principality’s Directorate of Communication’s representative Corrine Kiabski applauded the event, saying: “The festival was very productive for Monaco because we met some very interesting media reps and influencers, sharing the same values ​​in terms of sustainable development.”

Chef Ravin heartily seconded her viewpoints and added his long-held desires to spend time on the subcontinent. “I waited for so long to come to India, it is a dream that has come true for me,” he said. “It was such an experience to have been able to share our knowledge with Indian confreres, proving that cooking is above all a matter of love and sharin. So much so that this experience inspired me.”

The cross-cultural benefits are not only for those gastronomically inclined. As Rajeev Nangia, Director of the Monaco Office in India, pointed out: “This event was conceived with the aim of making the Principality’s culinary arts discovered here in India, and why not attract some high-end Indian travellers to the shores of the Mediterranean.”