This high-level annual meeting brought together Ministers of Foreign Affairs and senior representatives of the Organisation’s 47 member states to discuss how to promote respect for fundamental rights and freedoms, to ensure the long-term effectiveness of the European Convention on Human Rights and the strengthening of democratic security in a Europe facing multiple challenges.

Despite the crises that plague the continent and the many threats to the rule of law, the Secretary-General recalled the fundamental objective of the Organisation, which is to strengthen unity and enable the effective implementation of human rights on a European scale. He urged States to consolidate the achievements of the Council of Europe and to give it, on the eve of its 70th anniversary to be celebrated in 2019, a mandate adapted to current circumstances.

In his own speech, the Ambassador reaffirmed the political and financial support of the Prince’s Government for the Council of Europe. He also praised the Organisation’s flagship role as a platform for inter-state dialogue and cooperation aimed at ensuring the effective protection of the human rights of over 800 million European citizens, in particular through the European Court of Human Rights.

During the meeting, the Ministers also adopted a Protocol of Amendment which updates the Convention on the protection of personal data, in order to adapt the only international legally binding instrument of global scope to the challenges posed by the use of new technologies, information and communication.

Grid girls will still be part of...

Photo: Facebook Grid Girls[/caption] Despite the recent controversial decision to do away with grid girls at Formula 1 events, on the basis that using the beautiful girls as part of the glitz and glamour of the show was behind the times, it has been reported that the Monaco Grand Prix will continue to sport the grid girls, for at least the 2018 event. Liberty Media had announced earlier this year that it would be replacing the grid girls with grid kids, a decision that was welcomed by many as bringing the sport into the modern world. However, F1i.com said that the grid girls will be making a one-off return to the Monaco Grand Prix in May. The event organiser, the Automobile Club de Monaco, has reached an agreement with F1 owners Liberty Media to continue the tradition, according to several reports. ACM President Michel Boeri said, “We’ve had no problems with Liberty Media, except for the grid girl issue. They’ll be there, on the grid, but won’t be holding any name-boards. They’re pretty and the cameras will be on them once again.” A grid girls holds driver name-boards on the grid and lining the corridor through which drivers walk on their way to the podium if they finish in the top three. According to reports, some grid girls have said they earned enough money "to support the early years of their modelling careers or their college or university education". 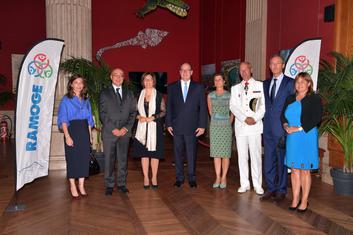 Photo: MC Channel[/caption] The tripartite Ramoge Agreement held a prestigious event at the Oceanographic Museum of Monaco on Tuesday night to celebrate its 40 years of activity, in the presence of HSH Prince Albert II, Marie-Pierre Gramaglia, Government Minister Counsellor of Infrastructure, Environment and Urban Planning, HE Mrs Marine Carne Trecesson de Coetlogon, Ambassador of France to Monaco, and Mr Cristiano Gallo, Italian Ambassador to Monaco. The winners of the photo contest on the theme of “The Mediterranean in all its forms”, received their awards during the evening. The Ramoge Agreement brings together Monaco, France and Italy to cooperate in practical ways concerning marine affairs and the protection of the coast in this part of the Mediterranean.