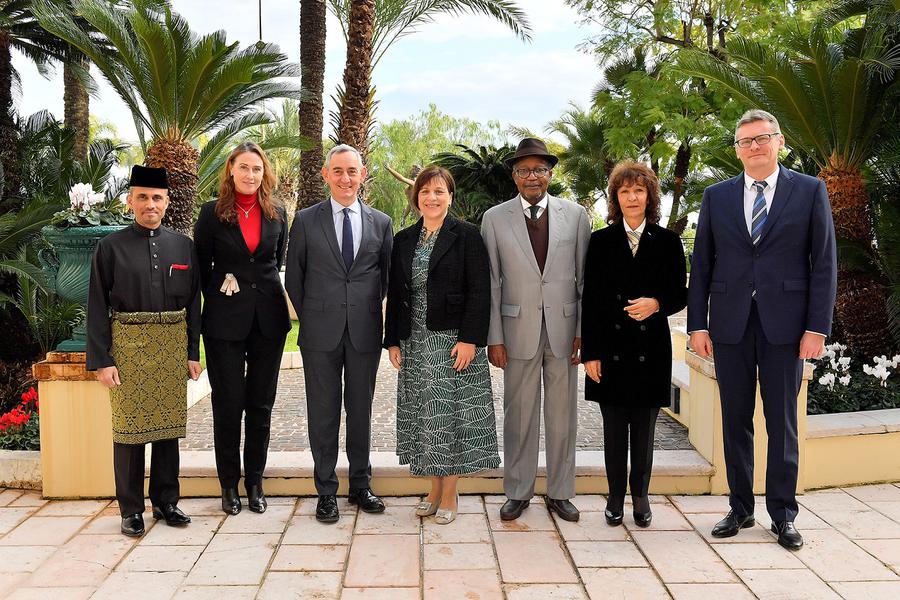 Monaco now has four new Ambassadors from Belarus, Malayia, Mali and the European Union. The diplomats were formally received at a luncheon at the Hermitage Hotel by the General Director of the Department of External Relations and Cooperation, Isabelle Rosabrunetto.

The ambassadors presented their Letters of Credence to HSH Prince Albert II last Friday before the luncheon, as is custom, and met with his approval.

Mr Fissenko joined the Ministry of Foreign Affairs (MFA) in Belarus in 1994. He rose through the ranks and was appointed Deputy Head of the Directorate of Law and Treaties in 1995, then went on to become Minister-Counsellor of the Embassy of the Republic of Belarus to the Kingdom of Belgium in 2001. He has held the Ambassadorships for his country in Egypt, Sudan, Oman and Algeria from 2008 to 2013, and finally became head of the Directorate General and Consular MAE.

After working in the Office of the Prime Minister as Deputy Director of the National Security Division, Dr. Mustafar was appointed to the same post at the Ministry of Foreign Affairs in Malaysia in 2001. Subsequently, he was promoted to Deputy Director for Research, Treaties and International Law, before becoming Director General to the Directorate of Maritime Affairs in 2015.

After leaving a post as Professor of Agriculture and Rural Economy in France, Mr. Diallo managed a pineapple plantation in Côte d’Ivoire from 1978. He returned to Mali in 1985, where he managed a group that exported mangoes to Europe. After a stint in the private sector, he held the positions of Director of the Cabinet of the President of the National Assembly and the President of the Republic. As Ambassador, he has represented his country in Morocco, Germany, Austria and several Nordic countries.

Mr Lenoir began his career in the French Navy in 1984. Seconded to France’s permanent representation in NATO from 1998 to 2001, he then joined the European institutions in Brussels where he has held several positions, mainly in the field of crisis management. In 2015, he was promoted to Ambassador, Head of the Delegation of the European Union to international organizations in Vienna. Appointed to the same position in Paris, he is in charge of promoting the positions and interests of the EU.

In a statement, the government said it “welcomes all of Monaco’s new diplomats and wishes them luck in their endeavours.”