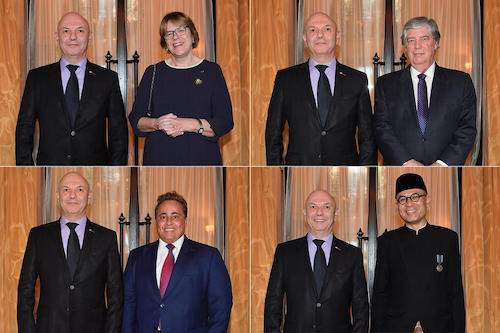 Monaco’s newest Ambassadors were given the green light by the Sovereign Prince earlier this week and subsequently welcomed by Minister of External Relations and Cooperation Laurent Anselmi.

The new diplomats hail from Norway, Chile, Qatar and Indonesia and presented their Letters of Credence on Tuesday 5th November.

The Ambassador from Norway, Oda Helen Sletnes, started her career in the Norwegian Foreign Ministry in 1981. By 1994, she was appointed Coordinator for Winter Olympic Games Affairs. Later, she acted as Deputy Director General, Head of the European Affairs Section of the MFA, Minister, Deputy Head of the Norwegian Mission to the EU in Brussels, Director General of the Department of European Affairs at the MFA and Ambassador and Head of Mission of Norway to the European Union.

Qatar’s Sheikh Ali Bin Jassim Al-Thani began his service as Minister Counsellor at the Directorate of American and European Affairs at the Qatari Ministry of Foreign Affairs in Doha, from 2007 to 2012. He then assumed the Ambassadorships in Luxembourg and Belgium where he became the first Ambassador of the State of Qatar to be accredited to NATO. He is founder of the Gulf Friendship Group in the European Parliament. Most recently, he became Ambassador of his country to the Republic of Austria, Slovenia and Slovakia from 2017 to 2018.

Sr. M. Arrmanatha Christiawan Nasir began his diplomatic career in 2001, becoming Deputy Director of Agriculture and Commodities in 2006 and then appointed Counsellor at the Permanent Mission of the Republic of Indonesia to the United Nations in New York. He then served as Deputy Chief of Economy, Finance and Development and Head of the Cabinet of the Minister / Spokesperson of the MAE.