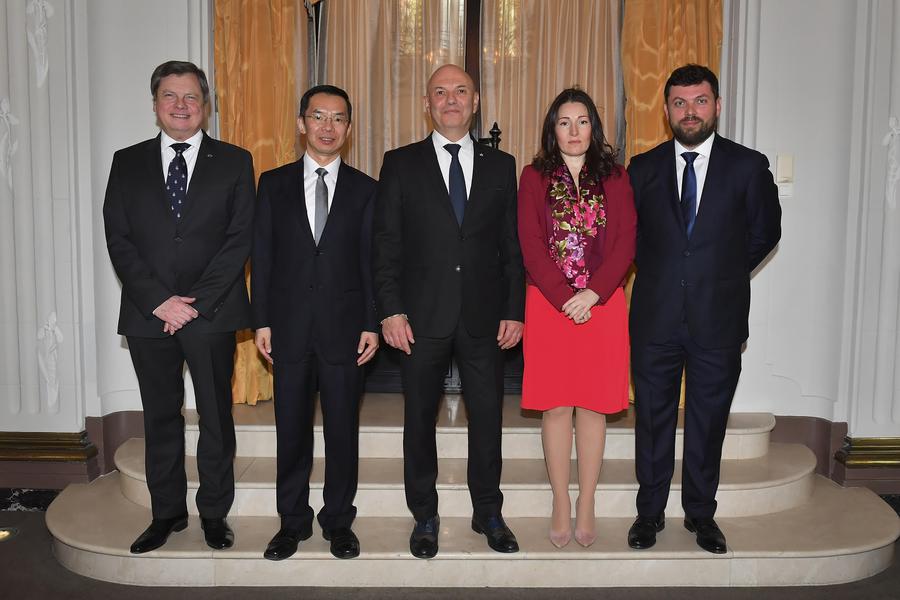 The Principality has welcomed four new Ambassadors from China, Brazil, Montenegro and Serbia.
At a lunch at the Hôtel Hermitage organised by Laurent Anslemi, Minister of Foreign Relations and Cooperation, Monaco’s four newest Ambassadors came together after having formally presented their credentials that morning to HSH Prince Albert II.
The new Ambassador from China, Lu Shaye, joined the Ministry of Foreign Affairs (MAE) in 1988 and worked his way up through the ranks at the Chinese Embassies in the Republic of Guinea, France and Senegal. He was promoted to Ambassador in 2005. Mr Lu was made Director General of Africa for the MAE in 2009, and in 2014 he was elected Deputy Mayor of the city of Wuhan in his home country. His next appointment was as Director General of Political Studies of the Office of the Leading Group of the PPC Central Committee in charge of Foreign Affairs from 2015 to 2016, and the following year he was appointed Ambassador to Canada, before coming to France and Monaco.
Luis Fernando De Andrade Serra was successively appointed Ambassador of Brazil to Ghana, Burkina Faso, Singapore and South Korea. Previously in Brasilia, at the MAE, he worked at the Divisions of Borders, South America and West Africa, as well as in the Secretariat of Internal Control and that of Relations between the Ministry and the Legislative Power. He also served as international advisor to the Ministry of Communications and the National Telecommunications Agency.
Ivan Ivanisevic began his professional career in the sector of multilateral relations at the MFA, as assistant to the Special Representative of the Government responsible for the accession of Montenegro to the Council of Europe. In 2011, he was appointed head of the OSCE Directorate and the Council of Europe and elected Director General of International Cooperation and European Integration of the Ministry of the Interior in 2013. From 2016, he held the positions of Minister Counsellor at the Embassy of Montenegro in Serbia, then Director General of Multilateral Affairs and Regional Cooperation of the Montenegrin MFA.
After a stint in the private sector in her home country of Serbia, Natasa Maric joined the MAE in 2000. She was appointed First Secretary to the Cabinet of the Deputy Minister for the EU in 2009 and then successively held the positions as National Coordinator Deputy to the Council for Regional Cooperation and Cooperation Process in South-East Europe, Deputy Director to the Directorate of Europe of the MFA, Minister Counsellor, then Chargé d’Affaires at the Embassy of Serbia in the United Kingdom.