Monaco runner in Athens for inaugural No Finish Line 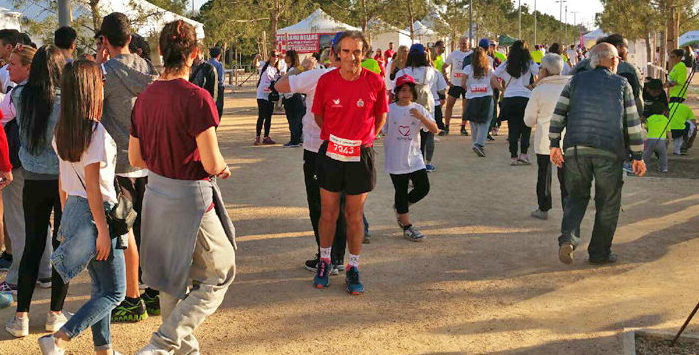 After nearly 20 years, No Finish Line (NFL), the 24-hour race over eight days on a 1370-metre circuit, has easily become one of the most popular events in Monaco across the year.

The concept is simple: to do as many circuits as you want and for each kilometre a participant completes, donors and sponsors will donate €1 to Children & Future, an association that supports projects in favour of disadvantaged or sick children.

Since Philippe Verdier started the first NFL in 1999, some 69,000 people have taken part.

Mr Verdier expanded NFL to Paris in 2015 and last year to Oslo, and has said that he hopes one day to have an NFL every week of the year worldwide. His dream continues with the first NFL in Athens, which kicked off Wednesday, April 26, at 7 pm. The event is with the support of Stavros Niarchos Foundation.

Patrice Loquet, who lives in the Condamine, has participated in Monaco’s No Finish Line over a dozen times and his personal best over eight days is 828 kilometres. He said that he stays motivated by pushing his limits “despite the pain”.

“For the Monaco NFL, I run day and night for the Automobile Club of Monaco team,” Mr Loquet told Monaco Life from Athens. “I sleep on the course on a bed the team provides.”

At the NFL start in Athens Wednesday, Mr Loquet said he’s in Greece for the same reason he runs in Monaco: “To raise money for children and the underprivileged. Also, I want to help promote this event that Hélène and Philippe Verdier have created.”

Mr Loquet, who describes NFL as “sharing, conviviality and fun to run”, has, additionally, participated in NFL’s initial Paris and Oslo events. “I meet so many different people, but I can also give advice to the cities organising NFL for the first time.”

He added, “There are three of us here in Athens. And enjoying a new country and spending a few extra days also adds to the inspiration, not to mention making friends with fellow runners.”

Local News Cassandra Tanti - September 6, 2020
Monegasque Formula One driver Charles Leclerc has thankfully walked away from a huge crash at Monza, which saw the Italian Grand Prix red flagged for the first time in 25 years.

News Stephanie Horsman - November 13, 2019
Two-time NBA champion Norris Cole has joined AS Monaco Basketball for the remainder of the 2019-2020 season. The 31-year-old former Miami Heat star played seven seasons and 428 games, including six playoffs in the NBA, before making the move across the pond in 2017 to play in the Euroleague for Maccabi Tel Aviv. Last season, he started with Italian team Sidigas Avellino before moving on to become a stand-out for Montenegro’s KK Budućnost. Cole joined the Roca Team just in time to play in Tuesday night’s 7DAY EuroCup competition where Monaco played Promitheas Patras. He is also on board for the upcoming French Jeep Elite match on 16th November against Dijon. When asked about the differences between playing ball in the States and playing here in Europe, the 1.88 metre tall athlete candidly said in an interview, “It was very different at first. But I like differences. I do not think everything should look alike. Different ways to play, different tactics, different rules too. Of course, I enjoyed the NBA. But I also appreciate being able to play in Europe… I am very happy to start this new adventure with AS Monaco." AS Monaco is 3-3 in EuroCup’s Group A and on track for a spot in the sweet 16. The team also have a 6-2 win-loss record in the French league.   Top picture: AS Monaco Basket Facbook