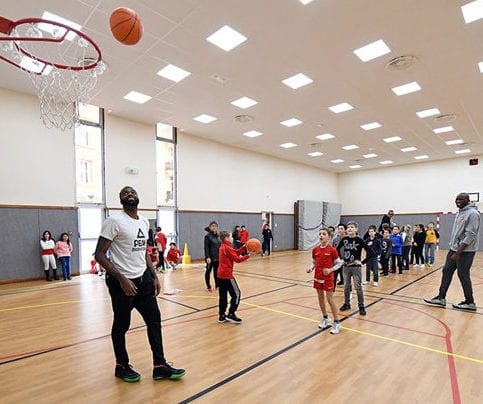 Members of Monaco’s very successful basketball team have been meeting hands-on with young students in Monaco to spread their own enthusiasm for the game. Olivier Basset, Roca Team’s assistant coach, Amara Sy, the team captain, and Jamal Shuler, one of the leading scorers in the team, were at the Révoires school on February 9 to share their passion.

During the visit, students of the fourth and fifth grades (CM1 and CM2) demonstrated a lot of enthusiasm for the sport and its local representatives.

This educational approach is part of the policy of the Directorate of National Education, Youth and Sports to enable pupils, particularly those of Révoires, to become familiar with certain sporting, artistic and cultural disciplines. For example, table tennis, dancing, and bridge sessions are offered to students every Thursday during their lunch break.

Roca Team, currently at the head of the PRO A championship, take on the Antibes Sharks February 14 at 8 pm.

AS Monaco Basketball is back after a long hiatus and showing they are more than ready for action with two wins in a row.

The Red and Whites will now have the benefit of a new Performance Department that synthesises athletic development with medical supervision, as well as a new Departmental Director, James Bunce.

News Stephanie Horsman - February 3, 2020
After a promising start, AS Monaco has fallen to Nîmes 1-3 away on Saturday. 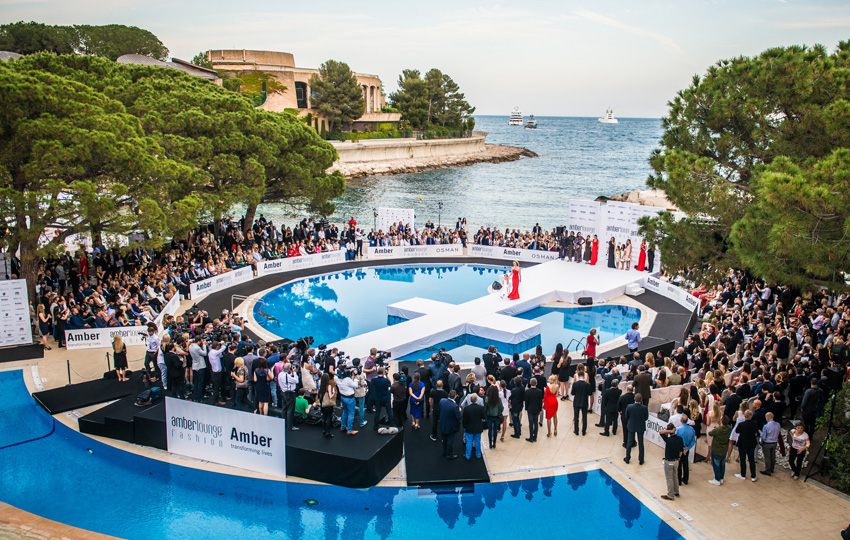 Amber Lounge, which celebrates its fifteenth anniversary this year, has joined up with Sir Jackie Stewart’s foundation “Race Against Dementia” with a charity event to support research into preventative medication for this heart-breaking illness. The Foundation will take centre-stage at Amber Lounge’s 11th Charity Fashion Show on Friday, May 26, at Le Méridien Beach Plaza, one of the highlights of the Grand Prix weekend. When Sir Jackie Stewart announced the launch of Race Against Dementia, Amber Lounge CEO, Sonia Irvine, wanted to help in any way she could. Just like Sir Jackie Stewart and his wife Lady Helen, Sonia and her brother, former F1 driver Eddie Irvine, have seen their mother Kathleen fight a battle with an illness over which they have no control. With both families so connected to the racing world, it was a natural decision to connect this potentially life-changing foundation to the Amber Lounge Charity Event “Amber Fashion”. [caption id="attachment_14078" align="aligncenter" width="711"] 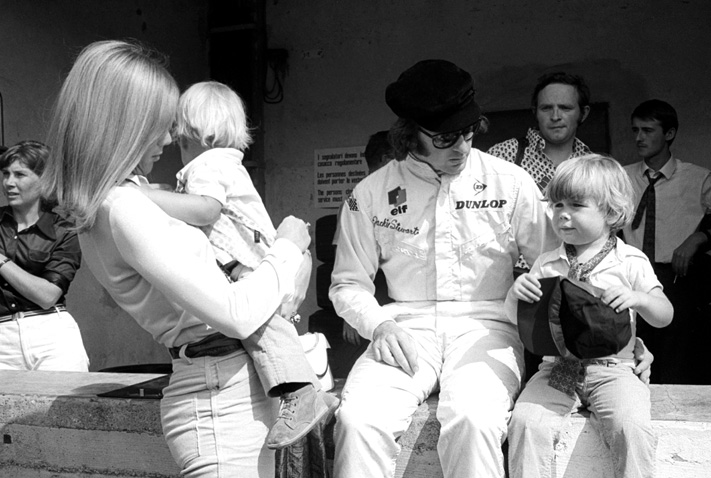 Jackie Stewart (GBR) Matra, won his first World Championship tile as a result of taking his sixth victory of the season. He's pictured here with his wife Helen Stewart (GBR) and son's Mark Stewart (GBR) right, and Paul Stewart (GBR), second from left.
Italian Grand Prix, Rd8, Monza, Italy, 8 September 1969. Photo: Sutton Images[/caption] Sir Jackie Stewart commented: “I am very grateful to Amber Lounge for their generosity towards Race Against Dementia, in helping to raise funds through the auction at the Amber Fashion event in Monaco. My wife Helen sadly suffers from dementia, so I am absolutely behind the event and look forward to a very special evening.” There are 45 million people around the world living with dementia today. One in three will get dementia in their lifetime and, one person is diagnosed with dementia every three seconds. “Alzheimer’s struck our family ten years ago, and we believe that it is one of the hardest diseases to come to terms with,”Amber Lounge’s Sonia Irvine commented. “The person is physically there, but the mind slowly slips away and with that their lifelong memories, leaving the families behind powerless and stuck in a time warp. The disease is at epidemic proportions and requires funds to raise awareness, support for the families and much-needed resources for research. “We decided there was no better person and no better partner for this cause than Sir Jackie Stewart and his charity Race Against Dementia, and my brother Eddie and my father Edmund will be present to lend their support. The Amber Lounge Charity Auction is a perfect opportunity for us to join forces and drive forward the fight against this terrible disease.” [caption id="attachment_14077" align="aligncenter" width="706"] 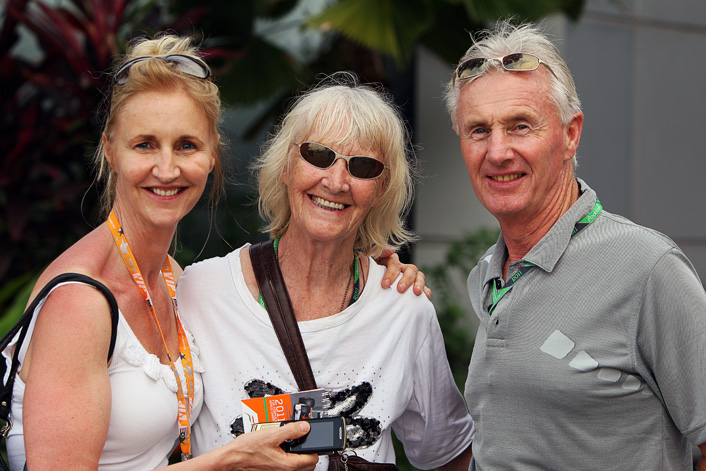 Amber Lounge CEO, Sonia Irvine, with her parents[/caption] World famous personalities and VIP guests, including leading figures from Formula 1, sport professionals, the CEOs of global companies and generous bidders, will come together as the Grand Prix weekend’s events open with red carpet arrivals and a cocktail reception, followed by the legendary Amber Lounge Fashion Show. F1 drivers will walk the runway dressed in bespoke Apsley Tailors suits while F1 ladies will showcase an exclusive silk collection from Silviya Neri. The evening will continue with the much-anticipated live auction, featuring iconic items and experiences with a minimum value of €50,000, while bidders will also be able to purchase lots of between €5,000 and €10,000 through the silent auction. Coveted auction items will include a fabulous and unique framed painting made by artist Arunas Rutkus, an impressive leather Luvienz trunk containing exclusive bottles of caviar-tasting champagne, a personal vintage package of champagne by Hatt & Soner, a series of unique motor racing photographs offered by Sir Jackie Stewart and many other rare collector items and experiences. [caption id="attachment_14080" align="aligncenter" width="713"] 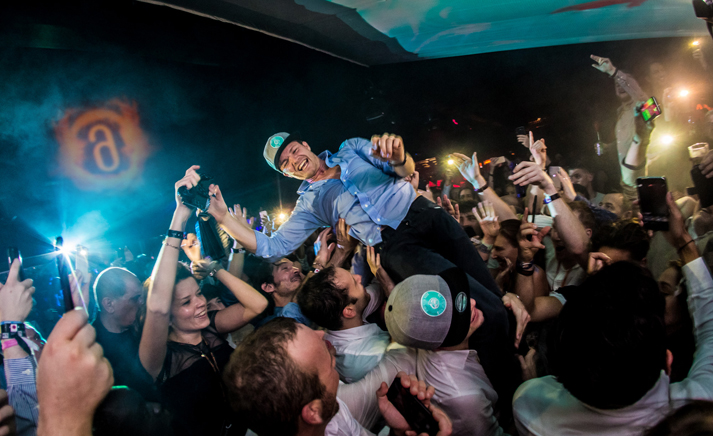 Formula One World Champion and Monaco resident, Nico Rosberg, at Amber Lounge 2016.[/caption] Dinner follows the auction before inevitably hitting the Amber Lounge dancefloor through to sunrise at this world-renowned after-party featuring international live acts and DJs. U*NITE tables (which include dining, fashion show and Amber Lounge after-party) range from €7,200, shared table passes from €900, After-party access from 11 pm only, tables from €5,200 and €350 per individual pass. For ticket information or to make an auction donation, or email fashion@amber- lounge.com or visit the Amber Lounge website.  Donations can also be made justgiving.com/race-against-dementia. Article first published March 20, 2017.